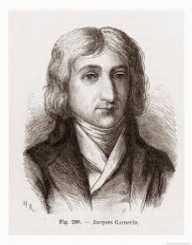 André-Jacques Garnerin is famous for his invention of the first ever modern parachute to take off. In 1797, he leaped 3000 feet using a parachute he had invented. His brave act made him the first word’s first parachutist to flaw such a height successfully using a parachute.

Andrew Garnerin was born in Paris, France on 31st January 1769. He conceived his idea of using air resistance balloon to slow down an individual ascending from a high altitude.

His imprisonment came after he was captured by the British army and handed over to Austrians. He later spent three years as a prisoner of war at Buda, Hungary.

He first created umbrella-shaped devices to compete with the force of gravity. His first successful parachute came on 22nd October 1797.

The parachute was frameless and was a white canvas with approximately 7m diameter, without a rigid frame. After climbing 3200 feet, Garnerin climbed into the balloon basket before wildly ascending down.

His soft descending power failed mainly due to the failure to include an air vent at the prototype top. He, however, escaped the scare unhurt.

His brave act earned him recognition as the first modern parachutist in the world. After the first trial Garnerin himself ready for his next project. He announced that his net trail would involve a woman passenger. The announcement, however, did not go well with the authorities.

The police, however, issued an injunction against the second balloon ascent trial. The decision was later overturned by the minister of Internal Security hence allowing Garnerin the woman to go on with the act.

Through a local daily, he announced on the day of the duo parachute trial. On 8th July 1798, a vast a crowd turned up to witness the ascent. Garnerin and the woman took several rounds to honor the huge crowd that had turned before boarding the basket balloon.

The parachute moved for 30 km before landing at Goussainville without a hitch.

Holding the position of an official French Aeronaut, Garnerin and his wife visited England on 5th July 1802. He made his first ascent in the English soil with Edward Hawke Locker. The duo traveled 24 km before landing in Chingford.

When the war between England and France began, Garnerin was forced to return to his country. Using his Air Balloon, he traveled 245 miles to France via Germany.

Andrew Garnerin was married to Jeanne Geneviève, his former student. In most of his ballooning activities, his older brother Jean-Baptiste-Olivier Garnerin and his wife accompanied him.

On 18th August 1823, Andrew Garnerin died during a balloon construction. A wooden beam hit him in his garage.

Andrew Garnerin is recognised for his first parachute jump.