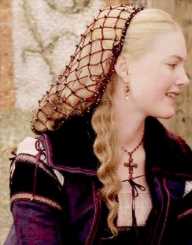 Lucrezia Borgia was born on 18 April 1480, in Subiaco, near the city of Rome, Italy. Her mother Vannozza dei Cattanei was one of the mistresses of her father, Spanish Cardinal Rodrigo Borgia, who later became Pope Alexander VI. She had two elder brothers, Cesare and Giovanni. She received an extensive and thorough education according to her social stature. She studied at Convent of St. Sixtus located very near to her temporary residence, where she was staying with her father’s third cousin Adriana de Mila since 1489 for her education.

Lucrezia Borgia developed a fantastic fluency in several languages including Spanish, Catalan, Italian, Greek, French, and Latin. She could both speak and write these languages fluently with astonishing proficiency in oration and poetry. She also learnt music, painting, and embroidery as part of her educational curriculum. She belonged to the family of Borgias, notorious for their evilness, violence, corruption and their desire to control the whole of Italy. Her despicable Italian family arranged several marriages for her to boost their political career further.

Lucrezia Borgia was married for the first time before her teens. Her father Pope Alexander VI dissolved an existing marriage contract between Lucrezia and a nobleman when she was only 11 years old. Instead, her father arranged her marriage to Giovanni Sforza, Lord of Pesaro and Count of Cotignola who was 15 years senior to her. The wedding took place in Rome on June 12, 1493, while Lucrezia’s father was declared Pope Alexander VI in 1492. Within four years, Lucrezia’s father realized that he would not be able to extract any further political advantage from her daughter’s first marriage.

Lucrezia Borgia's father had hatched a plan to kill Giovanni, but Lucrezia came to know of her father’s evil motives and warned her husband. Thus, Giovanni fled the country of Rome. Taking advantage of the fact that the marriage has never been consummated, he annulled the marriage between her daughter Lucrezia and Giovanni to the utter dismay and humiliation of the latter.

When on December 27, 1497, the marriage annulment was officially sanctioned, Lucrezia Borgia was found to be six months pregnant. Though initially the report of her pregnancy was denied; but on March 1498, a son was born to Lucrezia. The news was tightly kept a secret for the next three years. However, the child’s paternity was never established conclusively, and there were different types of rumour doing the rounds about the same.

Lucrezia Borgia's second marriage was solemnized on July 1498, when she married Alfonso of Aragon, the 17-year-old Duke of Bisceglie and the son of the late King of Naples. They had a son, Rodrigo of Aragon, who was born in 1499 and died at the age of 12 just before his mother’s death. Lucrezia’s father and brother Cesare soon found Alfonso as a potential obstacle to their ambitious plan to be at the helm of affairs of the whole of Italy. Lucrezia was appointed the Governor of Spoleto in 1499. Sensing trouble, Alfonso fled Rome only to return at his wife’s request. He was murdered in 1500. It is believed that Lucrezia’s brother Cesare was behind his murder.

The Borgia family politics required the third marriage of Lucrezia. In early 1502, Lucrezia Borgia was married for the third time to Alfonso d'Este, Duke of Ferrara in Ferrara. She had eight children from this marriage. The marriage itself brought relief to Lucrezia as she and Alfonso moved to Ferrara, away from the clutches of her father-brother duo and their never-ending scheming. Thriving in her new surroundings, Lucrezia rose above her previous reputation of being responsible for the betrayal and crimes committed by her infamous family.

With the passage of time, Lucrezia Borgia was seen as an accomplished and respectable Renaissance Duchess. She also took firm control of the fortune of the Borgia family after her father’s death. She was also entrusted with the responsibility of the governance of Ferrara and Vatican City Correspondence.

Apart from her three marriages, Lucrezia Borgia was rumoured to have several other extra-marital relationships. When her first marriage was annulled on the pretext of her husband’s confessed impotence under duress, she was six months pregnant. According to the rumor mills, the pregnancy was due to incest either by her brother Cesaro or by her father. The two Papal decrees issued in this regard were also of the same opinion, one confirming her brother and the other her father, be the illegitimate father of the child named Giovanni.

Lucrezia Borgia was remembered mostly as a member of the infamous Borgia family, the daughter of the dishonest and cunning Pope Alexander VI and the sister of the bloodthirsty and wicked Cesare Borgia. The murder of her second husband was widely rumoured to have happened by the invisible hand of her brother. Lucrezia’s long-lasting third marriage was not without its share of controversy. It was revealed that neither Lucrezia nor Alfonso were faithful to each other.

Lucrezia had a sexually charged relationship with her brother-in-law Francesco II Gonzaga, Marquess of Mantua. The affair ended when Francesco contracted Syphilis. She also had an affair with the poet Pietro Bembo around the same time. The love letters written between the two were archived in the Ambrosian Library of Milan and were declared the prettiest love letters in the world by the romantic poet Lord Byron. However, history has been kinder to her, and she is seen as a mere pawn in the hands of her sacrilegious family. Lucrezia was described as ‘pearl on the Earth’ due to her beauty and natural grace.

During her reign as the Duchess of Ferrara, Lucrezia Borgia earned a name as a sponsor of arts. She also was seen heading a famed and thriving artistic community. In 1512, after the death of her son Rodrigo, she confined herself mostly in her residence and in the neighbouring convents. She also became extremely religious. She already had a history of complicated pregnancies and miscarriages. On 14 June 1519, Lucrezia gave birth to her tenth child and fell seriously ill after the birth. She breathed her last on June 24, 1519, succumbing to her illness. She was interred in the courtyard of the convent of Corpus Domini.