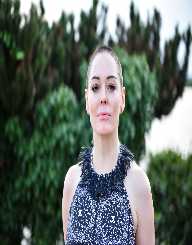 American actress Rose McGowan was born in Florence, Italy on the 5 September 1973 to Daniel and Terri McGowan. She is one of six children. When she was a child, the family relocated to the United States, and Rose McGowan spent some time living with her grandmother in Gig Harbor, Washington. As a teenager, she was involved in drug use and forced to go into drug rehabilitation.

Rose McGowan began her acting career with a role in The Doom Generation (1995) for which she was nominated for Best Debut Performance at the Independent Spirit Awards for 1995.

Between 1998 and 2001 Rose McGowan was engaged to musician Marilyn Manson. She married artist Davey Detail in 2013, and they divorced in 2016.

Rose McGowan is one of the actresses who has spoken out about Hollywood producer Harvey Weinstein and sexual harassment.