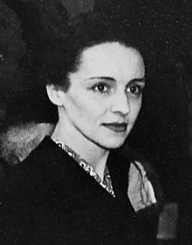 Born on September 12th, 1897, Irène Joliot-Curie grew to become a renowned scientist. Her parents were also famous scientists, i.e., Pierre Curie and Marie Curie. Together with her husband named Frédéric Joliot-Curie, they were winners of Nobel Peace Prize in the chemistry field in 1935. The two are to be credited for the discovery of artificial radioactivity. Bagging home this award as a family made the Curies family to stand as the family with the highest number of Nobel awards under their name.

Irène Joliot-Curie was born on September 12th in 1897. Her place of birth was in Paris, France. During her youth years when she was taking her early education, her mother named Marie Curie noticed the mathematical talent that her child had. This motivated her into finding her an academically challenging environment that would boost her mathematical abilities. Her mother joined hands with other French academic experts to establish The Cooperative.

This body was meant to bring together academic experts in France. From this group, Irène acquired her first scientific education. Two years later, Irène enrolled with Collège Sévigné which was located in central Paris. She schooled here for two years from 1912 t o1914. Soon, she joined the Sorbonne where she was to complete her bachelor’s degree in science. However, her education was cut short with the onset of World War I.

During the World War I, Irène Joliot-Curie worked with her mother in the 20 mobile hospitals that she had initially established. They were radiographers who made use of the newly invented X-Ray machine. After the end of the war, she quickly returned to Paris where she continued her education at the Radium Institute. This was her parent’s institution. Later on, in 1925, Irène managed to put an end to her doctorate studies. Her thesis covered the alpha decay on polonium. This was one of the elements that her parents had discovered.

During the same year of completing her thesis, Irène Joliot-Curie was romantically involved with Frederic Joliot who would later become her husband. The pair tied the knot a year later in 1926. It is from this marriage that the two decided against using the names Joliot-Curie as their surnames.

In 1928, Irène and her new husband combined their scientific know-how in the study of atomic nuclei. It did not take time before she landed a job as a tutor at the Faculty of Science. In 1934, the two discovered artificial radioactivity. Part of their background discovery relied on the work that Irène’s parents had worked on.

It was from this discovery that Irène Joliot-Curie and her husband cemented their place in the history of science. Thanks to their discovery that the rising demand for radioactive elements was met most cost-effectively and efficiently. The following year the couple were bestowed with the Nobel Peace Prize in the chemistry field. The two were highly acclaimed that Irène landed another job as a professor at the Faculty of Science.

Besides being active in the world of science, Irène Joliot-Curie had a particular interest in politics. She was a member of the Socialist Party in the year 1934. In 1936, she also participated in offering support to the Republicans during the Spanish Civil War. She was also admired for advocating for women education.

Irène Joliot-Curie passed away on March 17th, 1956. Part of the main reason for her early death was the fact that she had been exposed to radioactive materials. These led to her health deterioration at the time of her demise.