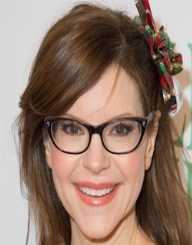 Lisa Anne Loeb was born on 11th March 1968. She was born in Bethesda, Maryland, in the United States. Loeb grew up in Dallas, Texas, and was the oldest of four children. Her father, Dr. Peter Loeb, is a gastroenterologist, and her mother, Gail, the President of the Dallas County Medical Society Alliance and Foundation.

When she was young, Loeb started with piano but changed to guitar. She studied at The Hockaday School, a private school for girls, and graduated in 1986. She then enrolled at Brown University. She graduated in 1990 with a degree in comparative literature. She also did a summer school class at the Berklee College of Music in 1990.

Lisa Loeb was still in university when she formed her first band with a fellow student, Elizabeth Mitchell, called, Liz and Lisa. They had another friend from class, Duncan Sheik as the guitarist. They produced two albums, but several years later, they went their ways.

In 1990, Loeb formed another band called Nine Stories. She started working with producer Juan Patino and released Purple Tape in 1992. The band was performing and selling their cassette at their gigs. She also performed solo on the coffee house and rock club circuits in New York City and developed a faithful following.

Lisa Loeb received her big break when her song, Stay (I Missed You), was used as part of the soundtrack for the movie, Reality Bites (1994). It became a number one hit in America. Her debut album, Tails, was released the following year in 1995. He next album, Firecracker, was released in 1997.

Loeb began releasing the albums under her name but still toured with her band globally. She also began to collaborate with other artists and contributed to tribute albums for artists such as Ozzy Osbourne, Cher, and Shania Twain. Her music has been featured in several hit movies, including Twister, Jack Frost, and Legally Blonde.

In 2002, Lisa Loeb changed record labels, moving to Artemis Records. In 2004 she changed again, this time signed with Rounder Records. In addition to regularly releasing new albums, she also moved into the children’s genre. Her first children’s CD was in 2003 and had a companion book with it called, Catch the Moon.

Loeb not only had her music, but she starred on television as well. In 2004, she had a reality show with Dweezil Zappa, her boyfriend at the time. Their show, Dweezil & Lisa, aired on the Food Network and involved them travelling around the U.S. and tasting different and unique dishes. In 2005, her second reality show was called Number 1 Single.

She is an accomplished businesswoman and launched her eyewear collection in 2010. She sells her brand of coffee which is organic and fair trade, and the profits go to her charity.

Lisa Loeb married Roey Hershkovitz in 2009. They have two children together.

Loeb has established The Camp Lisa Foundation, which helps underprivileged children to go to summer camp through Summer Camp Opportunities Promote Education, Inc. Loeb’s Foundation has allowed many children to attend summer camp when they otherwise would not have been able to.