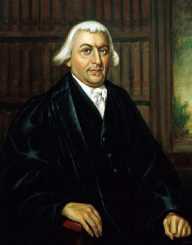 Samuel Chase was an Associate Justice of the United States Supreme Court and politician. Born on April 17, 1741, he was the representative from Maryland to sign the United States Declaration of Independence. Chase started a career as a lawyer in Annapolis, Maryland. He then served at the Baltimore District Criminal Court as Chief Justice and later at the Maryland General Court.

With much experience gathered, President George Washington appointed Samuel Chase to the United States Supreme Court in 1796. However, during the administration of President Thomas Jefferson in 1980, he was impeached for allowing his political lineage to influence his adjudication. The House of Representative triggered an impeachment process on articles of impeachment all based on political bias.

Samuel Chase was, however, acquitted by the Senate and he continued to serve on the Supreme Court until his death in 1811. As a politician, Chase served in the Maryland General Assembly and later in the Congressional Congress.

Samuel Chase was born on April 17, 1741, at Princess Anne in Maryland as the only child of Reverend Thomas Chase and Matilda Walker. He received early education at home. At the age of eighteen, he studied law under attorney John Hall in Annapolis. In 1761, he was admitted to the Bar.

Samuel Chase started his law practice in Annapolis after his admission to the Bar. His colleagues at the bar nicknamed him Old Bacon Face. He was a member of the Forensic Club, a debating society in Annapolis but as expelled in 1762, for irregular and indecent behavior.

Samuel Chase won an election to the Maryland General Assembly in 1764 and served for twenty years. While there, he engaged in several wars of words with many loyalist members of the Maryland political circle. Chase became a member of the Annapolis Convention in 1772 serving for two years.

Samuel Chase was Maryland’s representative at the Continental Congress. Winning re-election in 1776, he signed the United States Declaration of Independence. He served until 1778. Chase reputation was tainted for his involvement in an attempt to corner the flour market, through insider information he had due to his position in the Congress. This reputational damage caused his return to Continental Congress.

After Thomas Jefferson won elections to become the President of the United States in 1880, he became worried by the powers of the judiciary through their exclusive judicial review. He therefore through his Democratic Party championed the removal of Federalist from the bench. One of the targets was Samuel Chase.

Jefferson started his ambitions with the repeal of the Judiciary Act of 1801 through his allies in Congress. Through this, the lower courts created by the legislation were abolished and the lifetime appointments of the Federal judges terminated. Some activities of Chase in the court was seen as a disregard to the country’s constitution and through the Virginia Congressman, John Randolph of Roanoke, an impeachment charge was initiated.

The House of Representatives slapped Samuel Chase with eight articles of impeachment in 1804. Some of the points for the impeachment were his handling of the trial of John Fries and the political libel trial of James Callender.

The impeachment process presided over by Vice President Aaron Burr and prosecution led by Randolph began in 1805. However, the Senate voted to acquit Samuel Chase of all charges on March 1, 1805. Chase is the only United States Supreme Court Judge to be impeached.

Samuel Chase married Anne Baldwin, daughter of Thomas and Agnes Baldwin in May 1762. The couple had seven children; three sons and four daughters but only four survived childhood. Ann died in 1776. Samuel Chase later married Hannah Kilty, whom he met during a trip to England. They had two children, Elisa and Hannah. Samuel Chase died in 1811 of a heart attack. He was buried in Old Saint Paul’s Cemetery.