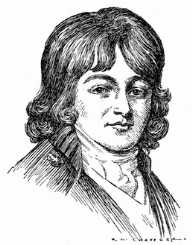 Francis Scott was born on August 1, 1779. His birthplace is Frederick County, Maryland and his star sign was Leo. Key was born into a wealthy family.

Francis Scott was homeschooled in his pre-teen years and then went to the Annapolis grammar school at the age of 10.  He attended St. John’s College for higher education and graduated with a degree in law.

Early Career And The War At Fort McHenry

In 1812, war broke out between the U.S. and Britain over France trade. Key who by then was practicing as a lawyer had to serve in the Georgetown Light Field Artillery. During the war, the British began to bombard Fort McHenry. At the same time, Dr. William Beanes was captured by the British forces. Key was asked to negotiate his release and boarded the British ship with two other men including Col. John Skinner.

Francis Scott was successful in getting Beanes released, but they weren’t allowed to land until the British finished bombarding Fort McHenry. The British reasoned that Key had seen the British troop strength and could rat them out. The next morning, Francis Scott saw an American flag on Fort McHenry and knew that the defense withheld the attack. Based on his experiences, he wrote a poem The Defence of Fort McHenry.

Francis Scott took this song to Thomas Carr – a well-known musician. The song was adapted to the theme of To Anacreon in Heaven.

The song was then popularly known as The Star Spangled Banner and was a representation of how bravely the American forces fought to hold off the attack from the British troops.

After the war, Francis Scott resumed his practice in law. He practiced in Washington D.C and became the district attorney in 1833. At the time, a lot of voice was raised to abolish slavery.

Although Key said that slavery was a sin publicly, he was known to have owned several slaves. His double standards, however, did little to damage his professional career. He went on to prosecute several people who wanted the slavery system to be abolished. He even supported the colonization of society and had a racist attitude.

Francis Scott was married to Marie Tayloe Lloyd. They tied the knot on January 1, 1802. The couple had twelve children – five daughters and seven sons. Key was a devout Christian in his life.

In 1842, Francis Scott had an infection in his lungs and was diagnosed with pleurisy. He lost his life on January 11, 1843, after struggling with the condition. He was 63 years old. In 1931, The Star Spangled Banner was declared as the U.S. national anthem.