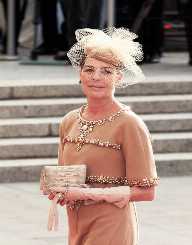 Princess Caroline of Monaco was born on January 23, 1957, in Monaco. Her parents are Princess Grace and Prince Rainier III. She has younger siblings as well. One of her siblings, Prince Albert II, was also a famous member of Monaco’s royal family. She also has a stepsister, Stephanie.

As a child and teenager, Princess Caroline attended St. Mary’s School. When she finished this school, she moved on to study at the Sorbonne in Paris. Here, she earned a bachelor’s degree in 1974.

Since her mother’s death in 1982, Princess Caroline has been the de facto first lady of Monaco (until her brother’s marriage in 2011), which meant that she took over some of the duties that a typical first lady would hold. This post was not official, but is the most responsible of the Grimaldi children, she fit the job perfectly.

Princess Caroline was named a UNESCO Goodwill Ambassador in 2003. She earned this title for her philanthropic works as the de facto first lady of Monaco, and she continued good works even as her time as de facto first lady ended. She often attended charity events, throwing many charity parties of her own.

Princess Caroline was first married in 1978 to Philippe Junot. However, the married was not a happy one. The couple divorced less than two years later. However, their marriage was not considered to be annulled by the Catholic church until 1992. She married again in 1983 to Stefano Casiraghi. The couple has three children together: Andre, Charlotte, and Pierre. However, because of her previous marriage, her children were not considered to be ligament by the Catholic church in Monaco. Because of this, her children would never be able to become heirs to the throne.

In 1990, Casiraghi sadly died. In 1992, the Catholic church decided to restore Andre, Charlotte, and Pierre’s legitimacy, which meant that they could not become heirs one day.  In 1999, Princess Caroline married Prince Ernst August of Hanover, Duke of Brunswick, making her not only the Princess of Monaco but also the Princess of Hanover.