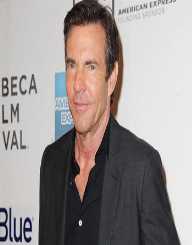 Dennis Quaid is an American actor who is best known for his leading role in The DayAfter Tomorrow.

Quaid was born on 9 April 1954 in Houston, Texas. Quaid’s parents were Juanita and William Quaid. Quaid’s mother worked as a real estate agent, and his father was an electrician. Quaid also has an older brother, Randy. Randy also became an actor and is best known for his role in Independence Day. Quaid went to study at the University of Houston but would drop out to move to Hollywood and try to make a living as an actor.

Quaid’s first appearance in a film was an uncredited part in the 1975 film, Crazy Mama. His first credited role was gained two years later in the fantasy film; I Never Promised You a Rose Garden. Quaid struggled to gain any traction in his career as he could only get bit-part roles in films that made the little impact commercially or critically. This changed in 1979 when he has cast in Breaking Away. The film is a coming of age will film were Quaid plays a member of a group of friends who are unsure of their futures. They enter a university cycle race to show up the college students. The film made ten times its modest two million dollar budget, but it received huge critical acclaim and was nominated for five Academy Awards. The success of the film boosted Quaid’s standing in Hollywood. His next film saw him appear with his brother Randy. The Long Riders focussed on Jesse James outlaw gang that operated after the American Civil War. The film focussed on the four sets of brothers in the gang and the film cast four sets of brothers to play the characters.

Next Quaid starred in the comedy Gorp. In 1981, Quaid appeared alongside Gene Hackman and Barbara Streisand in All Night Long. Quaid appeared in three more films in 1981, Caveman, The Night the Lights Went Out in Georgia and Stripes. Quaid the starred in the film Tough Enough for which he received multiple positive reviews. He also appeared in the second sequel to the Jaws film, Jaws 3-D and TheRight Stuff, in which he plays an air force pilot in the program to find America’s first astronaut. In 1987, Quaid appeared in The Big Easy, a crime drama which was successful at some film festivals. Quaid played Rock and Roll legend Jerry Lee Lewis in Great Balls of Fire. Quaid received praise for capturing Lewis’ onstage persona, although the film was less warmly received. Quaid lost forty pounds to play Doc Holiday in the western film, Wyatt Earp. Quaid’s character was suffering from tuberculosis, and Quaid lost the weight to play the frailty of the character more accurately. Unfortunately, the weight loss led to Quaid becoming anorexic, and he had also developed a cocaine addiction.

Quaid recovered and in 1996 played the lead in Dragonheart, a fantasy film which also featured Sean Connery. He then starred in the remake of the classic comedy The Parent Trap in 1998. The following year he played a struggling veteran quarterback in the sports film Any Given Sunday. The film was directed by Oliver Stone and also starred Jamie Foxx, Al Pacino, and Cameron Diaz. He also starred in the 2002 sports film, The Rookie, where he played baseball player Jim Morris. 2004 saw Quaid appear in some notable films. He appeared in the American historical film, The Alamo, in which Quaid plays Sam Houston.

He starred alongside Topher Grace in In Good Company. However, his best-known role in 2004 was as a paleoclimatologist in the disaster epic The Day After Tomorrow. He also appeared as the captain of a plane that crashes in the Gobi Desert in Flight of the Phoenix, in 2004. Quaid, the crew, and passengers have to repair the plane to escape certain death. He played Bill Clinton in 2010 film, Special Relationship.

Quaid married actress P.J Soles in 1978, and they divorced in 1983. In 1991, Quaid married the actress Meg Ryan. They had a son, Jack, together. Quaid was repeatedly unfaithful and the couple divorced in 2001. He married Kimberley Buffington in 2004, and they had twins, Thomas and Zoe, who were born through a surrogate. Quaid and Buffington have repeatedly filed repeatedly for divorce, but proceedings were never finalized. The couple is separated, and Quaid has been reportedly dating Santa Auzina, who is thirty-two years his junior. Quaid is an avid golfer who plays off one handicap. He is also a musician and holds a pilots license.

Quaid is a Baptist Christian.