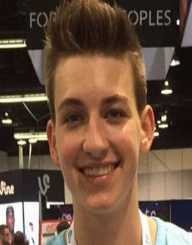 Ricky Garcia was born in 1999 in Puerto Rico. He has two other older brothers. His father served in the US Navy, and therefore at first, their family lived there until they moved to Texas.

Because of his stunning looks, Ricky Garcia first started a career of a model. This did not turn into an actual career, as he was chosen to participate in the “X Factor.” He had enjoyed singing since early childhood. Before participating in the X Factor, he had already been on stage before, most of the times impersonating Justin Bieber and performing his songs.

In the X factor, Ricky Garcia was admired by the judge Simon Cowell. It was Simon Cowell who later motivated Ricky Garcia to create a band with other two contestants of the show - Emery Kelly and Jon Klaasen. The band was called “Forever in Your Mind.”

Forever in Your Mind

The band released the first song and music video in 2013. It was for the song “She Lights the World.”

One of the participants of the band, Jon Klaasen left them in 2014. A couple of months later Jon was replaced by Liam Attridge. Liam is related to Emery Kelly.

After this change in the band, they were successful, and have been productive ever since – releasing several music videos, and a debut album with the famous song “Hurricane” in it. This debut album was produced by Disney’s Hollywood Records.

After being discovered by the X Factor, Ricky Garcia was also recognised as an actor. He plays Naldo in a show “Best Friends Whenever.” Disney produces this show. The theme song “Whenever” is coincidentally performed by the band of Ricky Garcia.

This is not the only show Ricky Garcia participates in. Another show he is in is called “Forever Boys.” All three participants of the band play the main characters in the show. It shows how three boys from the band are turned into vampires and how they cope and live on.

Ricky Garcia has appeared several times on the screen, and on stage. In 2015 they performed a lot and were on stage together with such celebrities as Jesse McCartney and Demi Lovato. In the year 2016, the band appeared on screen in the show of ABC, “Good Morning America.”

Ricky Garcia has also participated in a movie. He was filming in a movie “Mantervention” in 2014.

Ricky once stated that the most important thing is to be happy, and music plays a significant role in that. Other things that help him be satisfied are sports – surfing, snowboarding, baseball.

The first relationship of Ricky Garcia was with Destiny Rogers. This relationship was admitted publicly on the “ASKfm” show. Their relationship, however, did not last long, as Ricky met Chloe and soon became infatuated with her. They met in 2015, unfortunately, split up before the first year anniversary. The fans of the couple were disappointed when the couple ended their relationship, as they had even come up with a nickname for the couple “Clicky.” It combines both of their names. The reason for the break-up was the fact which both Ricky and Chloe had very different schedules and could not find enough time for each other to make the relationship work.

Since then Ricky Garcia has been seen in public with a model Beatrice Vendramin. They appeared together at the Radio Disney Music Awards.