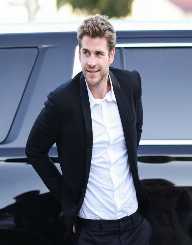 Liam Hemsworth was born on January 13, 1990, in Melbourne, Australia. He is the son of Leonie (an English teacher)  and Craig Hemsworth (a social service counselor). He has two older brothers, both actors, Chris and Luke Hemsworth.

Before Liam Hemsworth was an actor, he spent much of his time surfing on the Australian coast. When he wasn’t spending his days having fun out in the sun, he worked as a floorer for a construction group for about a year and a half. This didn’t last long, as he knew that he wanted to be an actor like his brothers.

When Liam Hemsworth first started acting, he worked on several TV series. His first series role was on a show called Home and Away, which only lasted one episode, and McLeod’s Daughters, which lasted just as long. His significant TV role was as Josh Taylor, on the famous Australian drama, Neighbours, in which he acted on for 25 episodes.

Hemsworth’s first movie was the sci-fi film Knowing, with Nicolas Cage. After this film, he worked on one more TV show, The Elephant Princess as Marcus for 26 episodes. From that point on, he stuck mostly to movies, working on Triangle and The Last Song.

In 2010, Liam Hemsworth got a significant role in The Hunger Games as the main character’s (Katniss) love interest, Gale Hawthorne. He was the heartthrob of District 12, at least, one of them. This gained him popularity around the world, especially from adoring teenage girls. He went on to play the same character in all four Hunger Games series movies. Some of his other famous films are listed below.

Throughout his short acting career, Liam Hemsworth has already managed to win six prizes, and he was nominated for 16 others. Below are a few of the awards, he has won.

As of 2016, it is estimated that Liam Hemsworth is already worth the impressive sum of $16 million.

Liam Hemsworth met the music/acting star Miley Cyrus while on the set of the movie The Last Song. The two had a roller coaster-like relationship. The couple were engaged for a short time in 2013, broke up for some time, got back together, and renewed their engagement in 2016.

Other notable relationships he has had include a high school girlfriend, Laura Griffin, a short-lived relationship with Amanda Bynes, January Jones, Eiza Gonzalez, Nina Dobrev, and Jennifer Lawrence.

Liam Hemsworth is known for being able to relate to teenagers across the globe, even though he was born in 1990. Here are some of his quotes that show his severe and quirky sides.