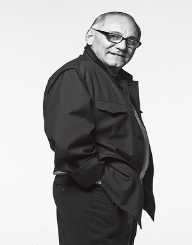 Max Azria is a Tunisian fashion designer who is famous for his contemporary women’s apparels.

Azria was born in Sfax, Tunisia. He was the youngest of six children in a Jewish Tunisian family. His older brother is Serge Azria who is the founder of women’s clothing lines Joie, Current/Elliot and Equipment. The family moved to Southern France when Azria was thirteen years old. In 1963 the family then moved to Paris.

In 1970 Azria began designing clothes for women in Paris. In 1981, Azria opened a line of retail stores in America. This line, called Jess, specialized in French clothing. Azria started ‘BCBG Max Azria’, (BCBG is from the French for good style, good attitude) in California in 1989. Azria is recognized as providing designer grade fashion at an affordable price. 1996 saw Azria present his first runway collection at New York Fashion Week.

In 1998, he was inducted into the Council of Fashion Designers of America. Azria extended his ‘BCBG Max Azria’ range in 1999 to include men’s clothing and plus sized apparel. In 1998 Azria bought the Hervé Léger fashion house and would relaunch the brand in 2007. In 2006 he also acquired the bankrupt G+G Retail brand. Azria launched a line of clothing for Walmart in collaboration with Miley Cyrus in 2009.

Azria’s ‘Max Azria Atelier’ label specializes in couture gowns for celebrities. Some of his noted clients are Halle Berry, Fergie, Sharon Stone and Alicia Keyes. In 2009, Angelina Jolie wore Max Azria to the Screen Actors Guild Awards and the Critiques Choice Awards. Since relaunching Hervé Léger in 2007 the label has been donned on the red carpet by, Kate Winslet, Britney Spears, Beyoncé, Catherine Zeta-Jones and Jennifer Lopez. After his Walmart collaboration with Miley Cyrus in 2009, Azria also designed clothing for Cyrus’ American tour. Azria has also worked with notable models Eva Herzigova and Jessica Stam. Azria also provided designs for the TV shows Friends and Seinfeld.

Azria has three children from his first marriage, Michael John, Joyce, and Marine. In 1992, Azria married Lubov Azria. Lubov was born in Ukraine and is chief creative officer for BCBG Max Azria Group. The pair have three children together, Chloe, Anais and Agnes and they live in Holmby Hills, Los Angeles, California. In 2009, Azria’s eldest daughter, Joyce, was made the creative director of BCBGeneration.