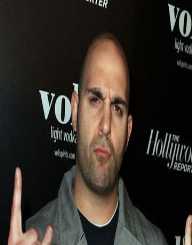 Ahmet Emuukha Rodan Zappa was born in the posh locality of Hollywood Hills of Los Angeles to the world-renowned musician, Frank Zappa, and businesswoman, Gail Sloatman. His date of birth is 15 May 1974, and he was the third child of the couple. The name ‘Ahmet’ was given by his father who was a big fan of music executive Ahmet Ertegün. He has three siblings, elder brother Dweezil Zappa, elder sister Moon Zappa and younger sister Diva, Zappa.

Ahmet Zappa was a dyslexic child who struggled to even read or write until the age of 12. The whole academic education process was traumatic for him, and hence, he eventually dropped out of school.

Ahmet Zappa began his career as a host at the tender age of 14. He was the anchor of the television show ‘2 Hip for TV’. Many famous faces from the music world like ‘Red Hot Chilli Peppers’ and ‘Sparks’ were seen as guests on the show. In 1990, Ahmet essayed the role of Jaime in his first film ‘Pump up the Volume’ which was a comedy-drama. Unfortunately, his debut failed to leave an impression on the audiences as the film flopped badly.

Ahmet saw his first success with the late 1990’s television comedy show ‘The Adam and Joe Show.’ He was seen in a regular segment titled ‘Vinyl Justice’ along with actors Adam Buxton and Joe Cornish. Throughout his acting career, Ahmet was seen in insignificant or blink and miss roles. In 1998, he played the character of Lazlo in the horror film ‘Children of The Corn V.’ He also had a small appearance in the American comedy movie ‘Ready to Rumble.’ Ahmet was also a popular host and has anchored TV shows like ‘Robotica’ and ‘Can They Sing?’

Another landmark project of Ahmet Zappa was the 2012 American fantasy drama movie ‘The Odd Life of Timothy Green.’ The film was conceptualized and co-produced by him.

More than acting, Ahmet was known for his literary skills. As a dyslexic child, he had to face a lot of problems reading and understanding textbooks. Hence, he made it a point to create something that children with learning disabilities would enjoy reading. Ahmet, in the company of his rocker father Frank Zappa, would watch monster movies during his childhood.

Drawing inspiration from his fascination and fear of monsters, Ahmet Zappa drew a series of illustrations and on the insistence of the publishers, wrote a story that explained the pictures. In 2006, the story was published as a novel titled ‘The Monstrous Memoirs of a Mighty McFearless.’ The novel is Ahmet’s best-known work till date and the rights to the movie has been purchased by Hollywood giants ‘Disney’ and ‘Bruckheimer Films.’

Ahmet Zappa is also the mastermind behind ‘Disney Kingdom Comics,’ the department of Disney which converts novels to films. One of Zappa’s long pending projects is the movie adaptation of the hit television show ‘Fraggle Rock.’ In 2006, he was approached by ‘The Jim Henson Company’ to write the movie adaptation. He is also currently working on a sequel to the novel ‘The Monstrous Memoirs of a Mighty McFearless.’

Apart from writing and acting, Ahmet Zappa has also composed several albums with brother Dweezil Zappa and co-wrote the song ‘Frogs with Dirty Little Lips’ with his father. After the death of his mother, Ahmet runs The Zappa Family Trust. He also has a production company named ‘Monsterfoot Productions.’

Ahmet Zappa runs The Zappa Family Trust and is currently embroiled in a family feud after having sent an open letter to brother Dweezil against the use of the family name in his concerts. Dweezil used to perform under the name Zappa Plays Zappa for years but is now being prohibited from doing so by the Trust.

Ahmet Zappa was first married to famous actress Selma Blair. They got married on January 24, 2004, at famous Hollywood actress Carrie Fisher’s mansion. However, they got divorced in the year 2006. Zappa then exchanged marital vows with designer Shana Muldoon; sister of actor Patrick Muldoon. The couple welcomed their daughter Violetta Zappa in the year 2011.