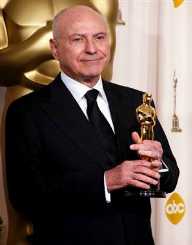 Alan Arkin is rightly known as an all in one person. He is a promising comedian, director, singer and actor. With over 60 years of experience in the film industry, Alan has traveled overseas, all thanks to his indelible skills. Before fame, Arkin showcased his acting skills in theater plays in the 1960s.His debut called when he joined a sitcom group called The Second City. This is what paved the way for more Oscar-nominated performances including The Russian Are Coming in 1966.Even though he is now defined as a film star in the making; Alan still shines when it comes to television, stage and film roles. Let’s see what he has in store for us.

On 26th, March 1934 Alan Wolf Arkin was first seen in the world in Brooklyn, New York, United States. His mother, Beatrice served as a teacher while his father, David I. Arkin worked as a lyricist and a painter. At ten years old Alan began to take acting lessons. At 11 years of age, his family went to live in Los Angeles where he was taken to a local school called Franklin High School. Simultaneously, to up his acting skills, he continued to join different acting schools. For three years he majored in nothing else that drama at the Los Angeles City College. After his end of term graduation, he joined Bennington College in Vermont where he graduated in 1954.

At first, Alan struggled to climb up the ladder, but he continued with a never give up soul. It was after trials and sweat that he began to appear in small roles both on stage and television. He also took odd jobs for his upkeep. At this time, he concentrated more on singing than acting. It was here that he established his band called The Terrier. He acted as a leading singer as well as a guitarist.

In 1956 the band released their first song titled The Banana Boat followed by Hill and Gully Rider. Both of the songs received acclaimed success. After some time the team was featured in a film called Calypso Heat Wave. It was after four years that Alan left the band to join another song group called The Babysitters. But he only managed to release one song called Heloise before calling it quit.

In 1959 Alan Arkin teamed up with the Compass Theatre in Missouri. After staying with them for several months, he co-founded a sitcom group called The Sound City. In the mid of 1961, Alan moved to his native land to launch his first album called From the Second City. After three years, he was featured in a comedy film called Enter Laughing.  It was the same year that he managed to write and act in a short film called that’s me.

In 1964 Alan started to appear in television roles where he was first seen in an episode called The Beatnik and the Politician. After a short pause, he appeared in a major film titled The Russians Are Coming in 1966.It was the first film that earned him countable of recognition and awards.

In 1969 Alan Arkin started to work in television, film and stage roles. This gave him a chance to appear on stage like The White House Murder Case and Sunshine Boys. In the 1970s onwards he was seen in movies that demonstrated his versatility. Some of the notable ones include the Wait until Dark sitcom. He also acted as a director of films like People Soup and Popi.

Throughout his career, some of his featured films received negative critics, but he managed to receive several nominations. For instance Catch 22 box office movie in 1970 was defined as a failure, but he garnered two nominations.

In 1980s Alan saw himself in comedy films like Simon and Improper Chanel that earned him a Saturn Award. After a short pause, he started to take it slow in regards to his career where he opted to concentrate on his family. Nevertheless, he managed to appear in high-quality movies such as Indian summer, Mother Night, Glengarry Glen Ross and Slums of Beverly Hills.

Alan welcomed the new millennium with a boom where he acted as a producer and director of a film like Eros, Thirteen Conversations about One Thing, Argo, Love the Cooper among others.

With over sixty years of experience, there is no doubt that Alan Arkin was created for the entertainment world. This is what made him receive a full array of awards and recognitions from different fields. Some of the notable ones include the Golden Globe Award, Academy Award, Kansas City Film Critics Award, Academy Award and Hollywood Film Award in 2012.

In 1955 Alan Arkin tied a nuptial knot with Jeremy Yaffe with whom he had two sons called Mathew and Adam Arkin. In all, the couple parted ways in 1961. He then married Barbara Dan, and they were blessed with a son named Tony Arkin. However, the couple called it quit in the 1990s. In 1996 Alan married Suzanne Newlander, a psychotherapist with whom they currently live within California. His sons seemed to have followed their father’s footsteps in film, stage, and television industry.