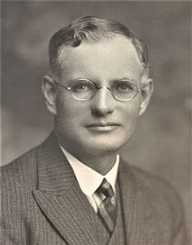 John Curtin was an Australian trade unionist and politician who is best known for being the country’s fourteenth Prime Minister.

John Curtin was born on 8 January 1885 in Creswick, Colony of Victoria. His parents were John Curtin and Catherine née Bourke. His family was of Irish descent, and he was raised Roman Catholic. Curtin’s father worked as a policeman. Ill health would force his father to retire, and young Curtin was forced to leave school aged thirteen to help support his family. He gained employment working for a newspaper in Creswick. He became interested in politics during this time and joined both the Labor Party and various socialist groups.

John also began writing for socialist and Marxist publications. In 1911, he worked as the secretary of the Timber Workers Union. He stood as a Labor candidate in Balaclava in 1914 but was defeated. During the First World War Curtin was militant in his opposition to conscription. He was jailed briefly during the war due to his failure to attend a mandatory medical inspection; he did this in protest as he already knew his poor eyesight would disqualify him from the armed forces.

John Curtin struggled with alcoholism during these years. In 1917, he moved to Western Australia and settled near Perth. He began writing for the Westralian Worker, the trade union publication. He joined the Australian Journalist’s Association the same year and would proudly display the association pin throughout his political career. Curtin used his writing position to advocate workers’ and women’s rights.

John Curtin stood for election a second time in 1925, this time in Freemantle. William Watson heavily defeated him. However, when Watson retired in 1928, Curtin won the election to fill his seat. In 1929, he was re-elected as the Labor Party swept to power. Curtin, mainly due to his struggles with alcohol, was not given a cabinet position and a strong anti-Labor vote and the return of William Watson to politics saw Curtin lose his seat in 1931. Curtin was re-elected in 1934 and stood for the Labor leadership in 1935.

Although an outsider, Curtin had the support of the trade unions and the party’s left wing. Also his opponent Frank Forde had been heavily linked with the Labor Party’s defeat in 1931. This led to Curtin winning the leadership contest by a single vote. He quit drinking following his election. Curtin’s leadership enjoyed little success in the 1937 election, but its increase in support in 1940 led to a hung parliament. At the outbreak of the Second World War, Australia joined Britain in declaring war on Germany.

John Curtin refused to form a coalition with the United Australia Party and only offered co-operation because conscription is not introduced for troops to be deployed overseas. The UAP called an election in 1940 but failed to gain an endorsement for their policies and were forced to rely on independent support. Curtin did serve on the cross-party Advisory War Council during this time. With the situation in the Pacific worsening and Curtin unwilling to form a national government with the UAP Prime Minister resigned and the independent MPs in the coalition switched their support to Curtin’s Labor Party. This made Curtin Australia’ fourteenth Prime Minister.

On coming to office Curtin and Australia faced significant threats, the Japanese were advancing steadily throughout the Pacific, and Australia’s forces had been committed mainly to fighting in Europe and Africa. Worse was to come as fifteen thousand Australian soldiers were captured along with tens of thousands of Commonwealth soldiers after the fall of Singapore in February 1942. Australia then faced air strikes from the Japanese air force as the Battle for Australia began. Curtin worked to have Australian veterans in the Middle East returned to Australia, and close cooperation with the Americans began to defend Australia.

General Douglas MacArthur was tasked with leading the Allied defence of Australia. Despite troops massing in Australia, the Japanese Navy was able to carry out raids on the Australian coast. The Australians performed a heroic case of the Kokoda Track in New Guinea as the Japanese attempted to seize Port Moresby as a launching pad for an invasion of Australia. Australian forces were the first to inflict a land defeat on the Japanese during the Second World War.

By 1943 the Allies had successfully turned the tide against the Axis in all theatres. An election was called, and John Curtin led Labor to their most celebrated ever election victory. Curtin in 1944 began planning for a post-war Australia and the world. He started shifting Australia’s economy away from wartime measures and ensured Australian representatives attended numerous conferences with Churchill and Roosevelt. His representatives were actively involved with the drafting of the U.N Charter especially about the roles of the smaller nations and employment rights.

The strain of office took a terrible toll on John Curtin's health; he suffered a heart attack in 1944 and the closing stages of the war he was hospitalised. During the war Curtin had carefully balanced Australian diplomacy, turning to the United States in the dark days of 1941 before reverting to support for the British Commonwealth after 1943. He also oversaw the introduction of many pieces of social welfare legislation.

John Curtin married Elsie Needham in 1917. The marriage is credited by many as helping Curtin become more moderate and helping with his drinking problem. The couple had two children, Elsie and John. Curtin died on 5 July 1945 in Canberra. A statue honouring Curtin was erected in Fremantle, the town that elected him as an MP. A pension of a thousand pounds annually for his family was voted for immediately after his death.

John Curtin wanted Australia to remain a bastion of the British race in the South Pacific and is seen as being a supporter of the whites-only policy that would govern Australian approached immigration for decades to come.