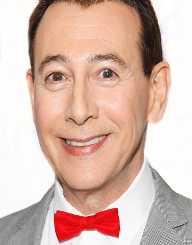 Paul Reubens is a comedian well-known for his onscreen persona Mr. Pee Wee Herman. His most famous works have been around this character, including Pee Wee’s Big Adventure and Pee Wee’s Big Holiday. Reubens is widely voted to be one of the best comedians, making you burst out into laughter, impeccably dressed in his gray suit.

Paul Reubens was born on August 27, 1952, in Peekskill, New York, the USA to Judy and MittonReubens. He has two siblings – a younger brother and a sister. As a child, he regularly visited two circuses in his area, The Ringling Brothers, and Barnum and Bailey Circus. It was this exposure to comedy that developed in him the desire of making people laugh with his jokes.

Paul Reubens attended the Sarasota High School. He then went to the Plymouth State University in New Hampshire. But soon, he quit studying to have a career in Hollywood. Before launching himself in Hollywood, he studied drama at the California Institute of the Arts.

Paul Reubens has had unparalleled success as a comedian. His character Pee Wee Herman is equally popular among kids as well as adults. Some of his best works include Pee Wee’s Big Adventure in 1985, the Pee Wee Herman Show, Mystery Men and Pee Wee’s Big Holiday in 2015.

Paul Reubens started his career as a comedian by becoming a member of the Groundlings. He created the character Pee Wee as a Groundling and started doing live shows. In 1981, one of his live shows was aired on HBO, and this brought him the recognition he was looking for.

He started the Pee Wee Herman show, and in 1985, he appeared in Pee Wee’s Big Adventure for which he received critical acclaim.

As Pee Wee Herman’s popularity grew, Reubens decided to launch a show for his character, called the Pee Wee Herman Show. During this period, he peaked in his popularity, and several famous guests appeared on his show.

In 1992, Paul Reubens started working on his career again and landed small roles in films like Buffy the Vampire Slayer, Blow and Mystery Men.

He also turned to theatre and did some shows there. There was no doubt his talent in making others laugh was missed, and he was accepted readily on a comeback.

He arrested again in 2002, for keeping child pornography. But the charges were dropped later for being false.

Paul Reubens lent his voice in the 2013 movie The Smurfs and also appeared in its sequel. The Pee Wee Herman show was brought back in 2015, and he also appeared in Pee Wee’s Big Holiday in 2016.

Not much is known about Paul Reubens’s private life. He is unmarried.