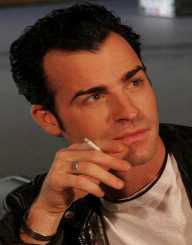 Justin Theroux is an actor, director, and screenwriter from America. He is most recently known as Kevin Garvey in the TV series The Leftovers. He has appeared in movies like Wanderlust, Tropic Thunder, American Psycho, Your Highness, The Girl on the Train, Zoolander 2 and more. He is also a writer who has contributed to films like Iron Man 2.

Justin Theroux was born on August 10, 1971. His full name is Justin Paul Theroux, and his birthplace is Washington, D.C. His star sign is Leo. Theroux’s father Eugene Theroux was a lawyer. He got his writing talents from his mother Phyllis who is also an author. Theroux comes from a family of highly educated individuals with several of his nephews being either poets, authors, or journalists. His ancestry can also be traced to the great musician Gustav Kobbe.

Justin Theroux went to the Lafayette Elementary School for his primary education. He then joined the Annunciation School and later graduated from the Field School. He holds a B.A. in visual arts & drama which he obtained from the Bennington College. While studying, he did small acting roles and got inspired to become an actor professionally.

Justin Theroux's first film role came in 1996 when he acted in the film I Shot Andy Warhol. He then went on to perform on Broadway and appeared in several films mainly of the comedic genre. Some of his early films include Charlie’s Angels: Full Throttle, The Baxter, Romy & Michelle’s High School Reunion, and Zoolander. He has also made a guest appearance in the widely popular film Sex and the City.

Justin Theroux didn’t keep himself limited to comedy roles only – evident by the fact that he played a role in the Christian Bale starrer American Psycho, a thriller movie. He has appeared in two films directed by the famous David Lynch – Mulholland Drive and Inland Empire.

Theroux is no stranger to TV audience as well. He played the lead character Kevin Garvey in the HBO TV series The Leftovers (2014-2017). Theroux is also a director. His debut film as a director was Dedication. He has used his screenwriting abilities to great effect while working on the movies like Iron Man 2, & Zoolander 2.

Justin Theroux met stylist Heidi Bivens in the 90s, and they had a romantic relationship for more than a decade. However, they split up in 2011. A year later, Theroux began dating actress Jennifer Aniston. They were working together at the time on the film Wanderlust. They got engaged soon, and three years later, they married each other. The marriage ceremony was kept private in their home in Bel Air, and only a few close friends were invited to the wedding. Currently, they are happily married and expecting their first child together.