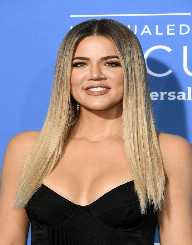 Khloe Alexandra Kardashian was born on June 27, 1984, in Los Angeles, California. Her father Robert was an attorney, and her mother, Kris, a homemaker. She has two older sisters, Kourtney and Kim and a younger brother Rob. Kardashian’s parents divorced in 1991, and she remarried to 1976 Summer Olympics decathlon winner Bruce Jenner. Her father was the defense lawyer for football player O.J. Simpson during his murder trial.

Kardashian attended the Marymount High School, a Roman Catholic all-girls school. She left the school and enrolled in a home-based school. When she was 17, she earned her GED.

Kardashian sister became widely known after Kim Kardashian’s and her former boyfriends Ray J sex tape was leaked in 2007. Later that year, the family was commissioned to star in the reality television series Keeping Up with the Kardashians. The series was a major success on the E! network, which also produced spin-offs, like Kourtney and Khloe Take Miami and Kloe& Lamar. The show Kourtney and Khloe Take Miami was announced in 2009. The same year, she also joined the Top 40 Mainstream outlet WHYI for a four-hour long entertainment program. She and her husband Lamar Odom premiered their show in 2011.

Khloe and her sisters have a business interest in the D-A-S-H clothing boutique in Calabasas, Miami, and SoHo. In 2009, the sisters collaborated with the Natural Products Association and created teeth whitening pen Idol White. She has also made several appearances on PETA’s I’d Rather Go Naked Than Wear Fur campaign. In 2010, Khloe and her sisters released a jewelry line and later that year, released a clothing line for Bebe.

Khloe has also hosted a radio show The Mix Up With Khloe Kardashian Odom. In 2012, she and Mario Lopez were confirmed for the second season of American version of The X Factor. However, she did not return to co-host the third season of the show. IN 2014, E! announced the show Kourtney & Khloe Take the Hamptons, a show which follows their relocation to The Hamptons. In 2016, Khloe began hosting Kocktails with Khloe talk show on the FYI cable channel.

In 2001, Khloe suffered in a car accident, where she went through the windscreen of the car. She had a severe concussion which caused long-term memory loss. In 2009, Kardashian married the NBA basketball player Lamar Odom. They married one month after they met at a party. The couple separated in 2013, and she filed for a divorce. They signed the divorce papers in 2015, but the judge had not approved the divorce when Odom was found unconscious in a brothel in Nevada. He was in a coma for four days, during which Kardashian withdrew her divorce petition.

In 2014, Khloe dated French Montana, but in 2015 she began dating basketball player James Harden. Her divorce with Odom was finalized in 2016, and she began dating Tristan Thompson. Khloe is also the godmother of her sister Kim’s daughter North.