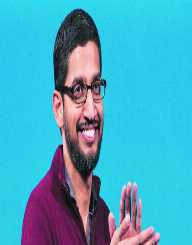 Sundar Pichai is a business executive of one of the top companies in the world.  The Google executive worked his way up the ranks to be the CEO.

Sundar Pichai was born on July 12, 1972, in Chennai, India in the Tamil Nadu region.   His birth name was Pichai Sundararajan.

His father was an electrical engineer for GEC, a British company.  Sundar Pichai was the manager of the factory that made electrical components.  The family lived a middle-class lifestyle.

Sundar Pichai started on his Ph.D. but stopped to work in the field.  His start at Applied Materials as an engineer and product manager was short-lived.  Instead, Sundar Pichai attended Wharton School to complete his MBA.

After completing his MBA requirements, Sundar Pichai became a management consultant for McKinsey & Company.  After that, Sundar Pichai worked for Google in 2004 with a team focusing on the search toolbar. Over the course of his work at Google, he worked on a number of their products including Google Gears and Google Pack.  When he thought of the idea for Google to have its browser, Sundar Pichai pitched the idea to the CEO Eric Schmidt.

When that was rejected, he pursued the idea to the co-founders Larry Page and Sergey Brin.  His efforts led to the launch of Google Chrome in 2008.  Chrome became the number 1 browse in the world and led to the development of other Google products such as Chrome OS, Chromebooks, and Chromecast.

Other businesses were pursuing him including Microsoft and Twitter.  However, Sundar Pichai stayed on and became more involved in other aspects of the Google company including Android.  By 2014, Pichai was the Product Chief.  In 2015, Sundar Pichai became the CEO of Google and shareholder of Google's holding company, Alphabet Inc.

Sundar Pichai married Anjali.  They met in college.  The couple has two children.

While Sundar Pichai is a brilliant computer engineer in his own right, his business sense of perseverance led to the success of Google Chrome and Chrome products.