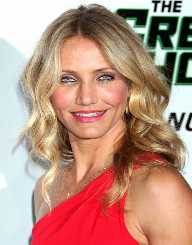 Luck doesn’t come easily to Hollywood actress. But that’s not true in the case of Cameron Diaz. While auditioning for a supporting role, she became the female lead in the 1993 super-hit, The Mask, and has not looked back since.One of  Hollywood’s mainstream actresses, she has many blockbusters under her belt.

While mainly focusing on comedy films like the Mask, she has done films in a variety of genres, like romance in The Holiday, action in Charlie’s Angels, and serious roles like in Gangs of New York.

Cameron Diaz was born on August 30, 1972, in California, San Diego to Billie and Emilio Diaz. Her full name is Cameron Michelle Diaz. Her father was an oil foreman. She has a sister named Chiminea. Cameron Diaz started modeling from her early teenage years due to her good looks and slim figure.

Cameron Diaz had no acting experience when she auditioned for a small role in the film The Mask, starring Jim Carrey. Luck shined on her, and she was considered fit enough for the female lead.

The movie was a grand success, and Diaz was praised for her natural acting. Offers started raining in, and the movie established her as one of the rising talents in the film industry.

In the coming years, Cameron Diaz continued to impress in both small budget movies as well as the mainstream films. She did a variety of roles that ranged from comedy to serious drama, glamorous and non-glamorous. Her most famous films include There’s something about Mary, Being John Malkovich, Gangs of New York, Charlie’s Angels, The Other Woman, The Holiday and Bad Teacher.

Cameron Diaz also played the female lead in the 2008 movie, What happens in Vegas. Diaz has also starred opposite veteran actors like Tom Cruise in the movie Knight and Day. She worked with Julia Roberts in the 1997 feature film, My Best Friend’s Wedding, for which she also received an ALMA award.

Cameron Diaz lent her voice to the character Princess Fiona, in the animated Shrek series from 2001 to 2010.

Cameron Diaz has made a comeback in the comedy genre with films like Sex Tape, The Other Woman, and Annie. She has also starred in a thriller, The Counselor in 2013.  One of the unique characteristics of Diaz’s film career is her ability to fit into any genre with ease.

Cameron Diaz has won many awards and earned several nominations in her long career. She was awarded the 1998 Alma Award, for her role in the film My Best Friend’s Wedding. In 1999, she earned the Funniest Actress in a Motion Picture Award for the film There’s something about Mary.

Cameron Diaz has a star on the Hollywood Walk of Fame at 6712, Hollywood Boulevard.

Cameron Diaz has been romantically linked with several men, both older and younger than herself. She has dated actors including Matt Dillon and Jared Leto. Her strong relationship with Justin Timberlake ended in 2005

AfterwardsCameron Diaz dated Alex Rodriguez, and they separated in 2010. Finally, Diaz settled down in 2015 and married Benji Madden.She lives in Los Angeles, California.