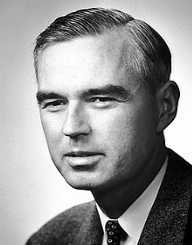 Willis Lamb was born in July 12, 1913. He was an American physicist. He received the Nobel Prize in Physics for his discovery of a minute difference in the energy levels of a hydrogen atom.

Willis Lamb was born on July 12, 1913, in Los Angeles, California. He was born to Willis Eugene who was a telephone engineer and Marie Helen Metcalfe. He was brought up alongside his brother, Perry. He attended Los Angeles High School. In 1930, he joined the University of California, Berkeley where he studied theoretical physics. In 1934, he graduated with a B.Sc in Chemistry from the university. He did his thesis under Robert Oppenheimer. In 1938, he obtained his doctorate from the University of California, Berkeley. His dissertation was related to electromagnetic properties of nuclear systems.

In 1953, he was awarded the Rumford Premium Award by the American Academy of Arts and Sciences. In 1954, he obtained an honorary D. Sc from the University of Pennsylvania. In 1955, he won the Nobel Prize in Physics. In the same year, he received the Research Corporation Award. In 1992, he was awarded the Einstein Medal by the Society for Optical and Quantum Electronics. He was also awarded the Guthrie Award by the Physical Society of London. In 1999, he became an honorary member of the Optical Society of America. He was a Fellow of the American Physical Society. He was also a foreign member of the Royal Society of Edinburg. In 2000, he received the National Medal of Science. He received honorary degrees from universities such as Yale University and Columbia University among others.

In 1939, he married Ursula Schaefer. In 1996, Ursula died. In the same year, he married Bruria Kaufman whom he divorced later. In 2008, he married Elsie Wattson. He, however, had no children from all the three marriages. He died on May 15, 2008, at the University Medical Centre, Arizona. He died at the age of ninety four.