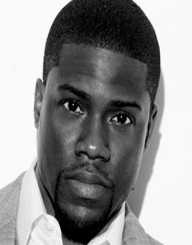 Kevin Hart was born on 6th July 1979, to Henry Witherspoon and Nancy Hart. He was born in Philadelphia, Pennsylvania, United States. He has one brother named Robert. Kevin Hart's father was a cocaine addict and spent his time in and out of jail when Hart was growing up. This meant that rearing the boys was done by his mother.

Kevin Hart studied at George Washington High School, and after graduation, he went to the Community College of Philadelphia, but dropped out after a short while and moved to New York City.

Kevin Hart moved to Brockton, Massachusetts, from New York City. He managed to find work as a shoe salesman, but after hours he was entering amateur comedy competitions at different clubs. He won several of them, and this led to his television debut in 2001 when he won a role in the television series, Undeclared.

The show only lasted one season, but Kevin Hart's talent soon saw him winning other roles, particularly in movies. He has been in such hits as, Scary Movie 3 (2003), Little Fockers (2010), and Jumanji: Welcome to the Jungle (2017).

Kevin Hart was one of the creators of Real Husbands of Hollywood, in which he is one of the stars. He created the show with Chris Spencer. The show started in 2014 and is still currently running.

Kevin Hart has hosted various award shows, including the 2012 MTV Video Music Awards. He is also musically gifted and signed with Motown Records under the alias of Chocolate Droppa.

He has also been in 27 different television series, including the hosting of award shows. Some of his television appearances include Modern Family, Saturday Night Live, and Top Gear.

Kevin Hart has been nominated for 34 awards and has won 17 of them. These include three People’s Choice Awards, three NAACP Image Awards, two Teen Choice Awards, and an MTV Movie Award.

Kevin Hart did have a small hiccup when he was arrested in April 2013 for drunk driving. He failed the field sobriety test and was charged with a DUI misdemeanor. He pleaded no contest later that year and was give three years on probation.

Kevin Hart married Torrei in 2003. They had two children together, a son and a daughter. The couple divorced in 2011, and Hart was awarded joint custody of the children

He then met Eniko Parrish, to whom he got married in 2016. They have a son together, born in November 2017.