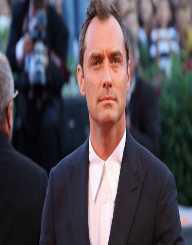 Jude Law began acting in the theater when he was only a teenager. He was a member of the National Youth Music Theatre group. While with this group, he performed in some plays.

After leaving school, Jude Law continued to act in plays before diving into the world of film and television. One of the plays he acted in around this time was Pygmalion, which he acted in the 1990’s. Some of the other plays he appeared in during the 1990’s include Indiscretions (performed on Broadway) and The Fastest Clock in the Universe in London.

After spending some years focusing on his film career, Jude Law returned to the Broadway stage in 2009 to appear in a production of Hamlet. In 2011 and 2013 he also appeared in two plays in the West End, Anna Christie, and Henry V. Since 2013, Law has continued to focus primarily on his film acting over his theater acting.

As a teenager, Jude Law appeared in two made-for-television movies in the 1980’s: The Ragged Child and The Tailor of Gloucester.

Jude Law began to focus more on his television and film career during the 1990’s. He appeared in shows, made-for-television movies, and in feature films. The first feature film he appeared in was Shopping in 1994, as the character Billy. From 1996 onward, after playing the character of Ethan in I Love You, I Love You Not, Jude Law focused only on feature films. Some of the other films and shows he appeared in during the 1990’s include Families, Shot at Dawn, Gattaca, Wilde, Final Cut, and Midnight in the Garden of Good and Evil.

Jude Law only appeared in feature films throughout all of the first decades of the 2000’s. This was a great move for him, as he appeared in larger roles and in more popular films than he had in the 1990’s. Some of the most popular films he appeared in during this decade include Cold Mountain, Closer, All the King’s Men, and Sherlock Holmes.

As of the 2010’s, Jude Law continues to act mostly in feature films, while occasional working on shorts and other projects. He has also began working in animated films, with his first voice acting role being in the 2012 animated film, Rise of the Guardians. Some of Law’s other popular films from the decade so far include Hugo, Anna Karenina, Dom Hemingway, The Grand Budapest Hotel, Sherlock Holmes: A Game of Shadows, and King Arthur: Legend of the Sword. He also had a recurring role as the character Lenny Belardo in the show The Young Pope in 2016. Jude Law is currently (2018) working on several films. He is expected to appear in the films Captain Marvel, Sherlock Holmes 3, and Fantastic Beasts: The Crimes of Grindelwald all within the next couple of years.

During the course of Law’s decades-long acting career, he has won over a dozen awards and has been nominated for more than fifty others. Some of his most impressive awards are listed below.

Jude Law married Sadie Frost in 1997. Together, this couple had three children: Iris, Rafferty, and Rudy. However, the couple later divorced in 2003. Jude Law later had another daughter, Sophia, in 2009 with a former girlfriend (Samantha Burke). Law’s most recent child, Ada, was born in 2015. Her mother is Law’s former girlfriend, Catherine Harding.