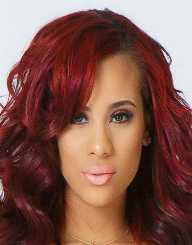 Cyn Santana is an American model and a rising social media personality. The beautiful African-American with a Dominican and Salvadorian descent is known for her picture upload on social media platforms like Instagram, Twitter, and YouTube.

Her popularity rose when she started mimicking famous top stars including Nicki Minaj, Kat Stacks, and Ray J among several other in her YouTube videos. These videos were well received on social media especially YouTube gaining her several followers and fame.

Cyn Santana now has over 2.2 million followers on Instagram with about 1118 posts and Twitter with 434 followers. On YouTube, she posts videos of herself and boyfriend Joe Budden and also doing renditions of popular songs. The intense social media popularity gained her the opportunity to be signed on the fourth season of VH1 reality show, Love & Hip Hop in 2013.

Social media is now throwing several people into fame in less time. The hustle that came withdisplayingone's talent in the past seems to have been curtailed by the inception of social media. One does not need to seek managers or pay huge sums of money to get be promoted as it was done in the past. With social media, all one need is to create an account on a popular site and ensure the account remains active with frequent postings and interesting stuff. This is how the likes of Cyn Santana gained the world’s attention.

Cyn Santana started her social media craze with an Instagram and Twitter account. She started with the post of eye-catching pictures that gained the attention to follow her. Soon, she started posting videos of herself imitating famous stars like Nicki Minaj and Ray J, etc. This attracted many followers to her accounts as the videos went viral. She has, however, not relented on her efforts as she continues to post attractive videos and photos. The most attractive side of her videos is the humorous part, which can let you go gaga.

Aside from her presence on social media, Cyn Santana gained national attention when she joined the season four of the reality show, Love and Hip Hop in 2013. In the show, she acted as the girlfriend of the popular model, Erica Mena. Cyn, after joining the show gained many followers on her social media accounts. She is a good singer and released a tribute single for his brother when he committed suicide.

Cyn Santana used the song to create awareness on suicides, depression and mental health and joined the organization SISFI.inc for such campaigns. She has come out with her own fashion line and sells on shps.NU.com. The gorgeous model is actually celebrating her fame status now as she plans her next move to keep in touch with fans and followers.

Cyn Santana was born on October 20, 1992, in New York, United States. She is an Africa-American with the Dominican and Salvadorian descent. Growing up, she developed an interest in acting and has moved that passion a step further by taking acting courses. The 23-year-old beautiful model was rumored to be dating reality show host, Erica Mena but she quickly refuted the claims saying, she is not a gay.

Cyn Santana is currently in a relationship with cast mate, Joe Budden. She has also been involved in several philanthropy acts to give back to the society. She is known to be a foodie.