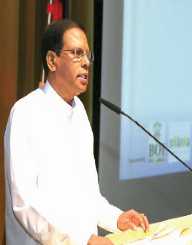 Ranasinghe Premadasa is a Sri Lankan politician and the third president of the country. Born on June 23, 1924, he served in that capacity from 1989 to 1993. Before rising to that office, Ranasinghe Premadasa first served as the Prime Minister in the administration of AJ.R. Jayawardene from February 6, 1978, to January 1, 1989. In 1986, President Junius Richard Jayewardene awarded him the Sri Lankabhimany, Sri Lanka’s highest award ever given to a civilian. He was the first person to receive that award. Premadasa was killed in a suicide bombing by the LTTE in Colombo on May 1, 1993, during a May Day rally.

Ranasinghe Premadasa abandoned his ambition to seek higher education at the University of London but rather embark on social service to seek the welfare of the poor and vulnerable in the society. Ranasinghe Premadasa founded the Sri Sucharitha Movement, an organization aimed at improving the economic, social and spiritual empowerment of lower earning people in undeveloped areas of Colombo. The code of the organization was such that all the youth who joined did away with smoking, taking liquor and gambling.

Ranasinghe Premadasa started his political career by associating with A.E. Gunasingha, founder, and leader of the Ceylon Labour Movement. His decision at the time was met with several ups and down during the initial stage. As a member of the San Sebastian’s Ward, he served as a Deputy Mayor of the Colombo Municipal Council 1955. Premadasa later joined the United National Party (NDP) in 1956, as Ranasinghe Premadasa saw the Labour Party’s future fortunes as oblique. That same year, he unsuccessfully contested against Dr. N.M. Perera for the Ruwanwella constituency at the 1956 general election.

Ranasinghe Premadasa became the became the second Executive President of Sri Lanka after the resignation of J. R. Jayewardene. In 1989, he led the NDP to victory in the general election. Some of the member of the NDP along with the opposition members of parliament unsuccessfully tried to impeach him. Premadasa took over a country, which was in a various degree of challenges in both the economy and security.

Ranasinghe Premadasa took consented efforts to address the insurgency in the South of the country and the presence of the Indian Peace Keeping Force in the North and East. His approach in tackling the challenges of the economy yielded positive results. As a social welfare advocator and his past work in that field made him very successful in tackling such issues as a president.

Ranasinghe Premadasa was very successful in poverty alleviation interventions, housing and improving the standard of living of the citizens. Ranasinghe Premadasa took this dream to the international level and made a proposal at the United Nations Organisation to declare a year as the International Year of Shelter. This proposal was accepted unanimously at the 37th session of the United Nations General Assembly. The year 1987 was then declared the International Year of Shelter for the Homeless.

Ranasinghe Premadasa initiated several other policies including the Jana Saviya to help the poor, Gam Udawa project, a pension scheme for the elderly artists and established the Tower Hall Foundation for drama and music among others.