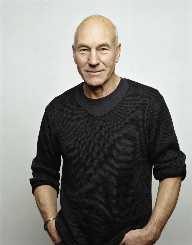 Patrick Stewart was born on July 13th, in 1940. His place of birth was in Mirfield, Yorkshire in England. Steward’s early career revolved around the Shakespearean theatre. He showed his passion and zeal towards these works of literature and got involved with the plays. During the 90s, his career took another turn as he featured in the hit film Star Trek: The Next Generation. He played the role of Captain Jean-Luc Picard. He also got a career uplift after featuring in the X-Men movie series while playing Professor X. His comedic abilities later earned him a Golden Globe nomination in the TV show Blunt Talk. Aside from his success in the film and TV, Stewart is still active in the theaters.

Patrick Stewart was born in 1940 to Alfred and Alice Stewart. His father was in the British Army and that he had high ranks for being a Sergeant Major. On the other hand, his mother, Alice was a textile worker. Stewart also had two brothers, Geoffrey and Trevor who were older than him. Growing up close to an abusive father made life quite challenging for the young boys. Aside from this, their family was simply poor.

Stewart later enrolled at Crowlees Church of England where he received his junior education. This is where he met one of the English teachers, Cecil Dormand, who played an important role in motivating Stewart to work on his acting talent by engaging in Shakespeare’s plays. After this, he went to Mirfield Secondary School.

After taking inspirations from his English teacher seriously, Patrick Stewart enrolled at the Bristol Old Vic Theatre School in 1957. It took him two years before landing an essential role in the theaters. He was to play in Treasure Island-1959. In 1960s he had gained recognition which helped him land several roles in different theatre companies such as Old Vic Theatre Company and Manchester Library Theatre. While working with the former, he toured a lot as he managed to perform in Australia, South America and in New Zealand.

His success in the theatre business continued as he later went on to work with Royal Shakespeare Company. This company had high rankings in the theatrical works. While working with the royal company, he toured the U.S. for a couple of years. Some of the plays that they were performing in their tours include Much Ado About Nothing, King Lear and As You Like It.

During the early part of his film career, Patrick Stewart landed minor roles in several movies such as Hennessy and Hedda. Around this time, he also featured in one of the episodes for the series called I, Claudius-1976.

In late 1970s, things began to brighten up for Stewart as he won the Laurence Olivier Award in 1979. He also landed a theatrical nomination award for best actor in The Merchant of Venice productions. Still, in 1979, he appeared in yet another series, Tinker Tailor Soldier Spy for a single episode.

Ultimately, Stewart landed a role that would change the course of his career. He featured in the new series called Star Trek: The Next Generation as Captain Jean-Luc Picard. The productions of the TV show would later run from 1987 to 1994. After a short period of trying to win fans to their side, soon the show became a major hit. With time, the show began to attract up to 20 million viewers in every episode. This show earned Stewart an identity that would have a positive impact later in his career endeavors.

Years later, Stewart went on to reprise his roles in the hit TV show while acting as the captain. He brought his unique role in movies such as Star Trek: First Contact- 1996, Star Trek: Insurrection-1998, and Star Trek Nemesis-2002. Around this period, he had began screening for a new role as Professor Charles Xavier in the new movie X-Men- 2000. After its release, the movie was a commercial success grossing over $157 million at the box office. Later on, in 2006, he reprised his role as Professor X in X-Men: The Last Stand. Recently he ventured into the TV business by playing the leading role in Blunt Talk-2015.

In 1966, Patrick Stewart tied the knot with choreographer Sheila Falconer. Together they had two children, Sophia and Daniel. After ending his first marriage, he got married to Wendy Neuss in 2000 before divorcing in 2003.

Immediately after this, Stewart entered into an affair with Wendy Neuss, an actress. This relationship lasted for four years before terminating in 2007. In 2013, he wedded a Brooklyn-born singer, Sunny Ozell.