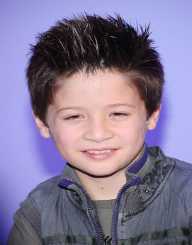 Davis Cleveland was born on February 5, 2002, in Houston, Texas, United States of America. He is an American actor. He is fifteen years old. He was born to Anthony Cleveland who was a businessman and Kendall Cleveland who was a model. His parents divorced while he was still a baby. He was brought up alongside three siblings, Paul, Jackson, and Marybeth. He has a YouTube channel where he posts his videos, but he also has a second channel where he posts his music videos.

Davis Cleveland is best known for his role in the Disney Channel original series ‘Shake Up.’ He has also appeared in several series such as ‘Criminal Minds,’ ‘Desperate Housewives,’ ‘Hannah Montana,’ ‘Good Luck Charlie’ and ‘How I Met your Mother’ among other series. He loves being and spending time with the cast of ‘Shake It Up’ at Disney World.

Davis Cleveland started acting when he was very young. He did not go straight to movies and series, but he began by appearing in commercials for brands such as McDonald's and General Mills Cereals. In 2008, he starred in an episode of the series ‘How I Met your Mother.’ In the same year, he also appeared in the crime drama ‘Criminal Minds’ as Ricky. He later went ahead to appear in series such as ‘Good Luck Charlie,’ ‘Alone for Christmas,’ ‘Zeke and Luther,’ ‘Hannah Montana’ and ‘Desperate Housewives.’

In 2010, Davis Cleveland got a significant role as Flynn Jones in the Disney Channel original series ‘Shake It Up.’ He has since appeared in seventy five episodes of the series. He loves the experience that he gets from working with the cast of ‘Shake It Up.’ The cast has become a second family for him. He has a very supportive mother who pushes him to achieve more success in his career. He starred in Nickelodeon’s original television movie ‘Rufus’ which was released in 2016. He is determined to make his career grow.

Davis Cleveland is determined and hardworking at his young age. At the age of fifteen, he has already become an established and famous actor. He is not only an actor but an excellent dancer. He loves dancing and posting his videos on his YouTube channel. He is also comical, and he dreams that one day he would make a good comedian. He also loves athletics as his athletic skills include swimming, rollerblading and skateboarding among so many other athletic activities. He also enjoys singing, and he is a good rapper.

Davis Cleveland has a YouTube channel where he posts rap videos and music videos. He has numerous followers on YouTube and his videos are viewed now and then by his fans. He has created a music video called ‘Monster Mash’ which features Adam Irigoyen and Kenton Duty. He is also involved in fundraising campaigns and charity events for research on diseases and spreading their awareness.

He contributes a lot of money to ensure that a cure for Cystic Fibrosis is found. He has been following the progress of a young girl named Maci Drewry who is suffering from Cystic Fibrosis. The struggles that the young girl goes through inspired him to take up the cause and held the research. He is a role model to many young kids of his age.

Davis Cleveland was born in Houston, Texas. His parents divorced while he was still a baby. He is a Christian, and he loves playing video games during his spare time. He also enjoys playing guitar. Composing music is also something that he loves so much because he is a singer. Davis is also interested in different types of martial arts.