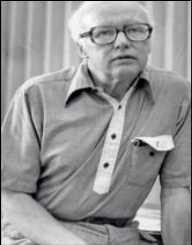 John Dann MacDonald was born in July 24, 1916. He was an American Novelist and short story writer. He was popularly known for his thrillers. He wrote seventy eight novels and five hundred short stories.

John Dann MacDonald was born on July 24, 1916, in Sharon, Pennsylvania. He was born to Eugene who was a business executive and Marguerite MacDonald. His family later moved to Utica where he attended Utica Free Academy. He developed an interest in writing while he was still very young. In 1933, he joined Wharton School of Finance at the University of Pennsylvania. He later stopped going to school and started doing odd jobs. In 1939, he joined Harvard University where he graduated with his MBA Degree.

In 1939, he became an insurance salesman. He later became a repossession agent for a bank. MacDonald lost most of his jobs because he had an uncontrollable temper. In 1940, he joined the United States Army Ordinance Corps where he served in the Burma-China-India theatre. He was later appointed lieutenant colonel. He used his leisure time to write. He one day sent his wife the story ‘Interlude in India’ which his wife published with the magazine story without his knowledge. He started a career in writing when he came to know that his story had been published. 1945 saw his discharge from the army, and he embarked on a writing career. In 1949, he established himself as a short story writer as he wrote a lot of stories, but they were not published.

MacDonald later settled with his family at Sarasota, Florida. In 1950, his detective novel ‘The Brass Cupcake’ was published. He continued to write, and he became famous hence gaining the name ‘King’ of pulp fiction. He published another novel ‘The Executioners’ which captured the attention of Hollywood and it was adapted into the film ‘Cape Fear.’ In 1964, he began writing a lot of detective novels. In 1977, he published the novel ‘Condominium’ which was about the destructive outcomes of hurricanes in Florida. The novel became a New York Times bestseller. In 1985, he published the novel ‘The Lonely Silver Rain’ which was nominated for the Anthony Award for Best Novel. In 1986, he wrote ‘Barrier Island.’

In 1980, he received the National Book Award for his novel ‘The Green Ripper.’ He received an honorary doctorate degree from the University of South Florida.

In 1937, he married Dorothy Prentiss with whom he had a son, John Prentiss. MacDonald passed away on December 28, 1986, of a heart attack in Wisconsin. He died at the age of seventy. He remains were buried at Holy Cross Cemetery in Milwaukee, Wisconsin.