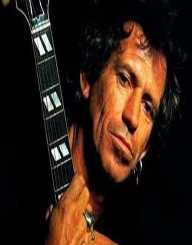 Keith Richards was born in Dartford, Kent, England on December 18, 1943, in England. His parents were Doris and Bert Richards.

As a child, Keith Richards attended the Wentworth Primary School. After he aged out of this school, he went on to attend Dartford Technical High School for Boys. He was later expelled from this school in 1959 after skipping school too often.

As a young adult, Keith Richards attended the Sidcup Art College. However, he later dropped out of school to pursue music as a full-time career.

After dropping out of college, Keith Richards began playing with the band, Little Boy Blue, and the Blue Boys, as the band’s guitarist. This band soon changed its name to what is known as now: the Rolling Stones. The band soon signed on With Decca Records in 1964. In the same year, the band released their first album: The Rolling Stones. This album became #1 on the charts in the UK and went RIAA Gold. Later on, in the same year, the band released the album 12 X 5 with London Records. This album was not as popular as their first, but it still earned an RIAA rating.

The mid-1960’s was a highly productive time for the Rolling Stones. In 1965 alone, the band released four studio albums: The Rolling Stones No. 2, The Rolling Stones, Now!, Out of Our Heads, and December’s Children. All of these albums were highly successful. Throughout the rest of the 1960’s, the Rolling Stones released an album or two each year. Each album reached high RIAA rankings, including Gold and Platinum. Some of their most popular albums included Aftermath, Between the Buttons, Beggars Banquet, and Let it Bleed.

The band only produced about half as many albums in the 1970’s than they had in the 1960’s. In this decade, they also started to release their albums on their record label: Rolling Stones Records. Their studio albums from this decade include Sticky Fingers, Exile on Main St., Goats Head Soup; It’s Only Rock ‘n Roll, Black and Blue, and Some Girls. All of these albums were extremely popular, reaching in the top five on the charts (in both the UK and the US) and reaching at least the RIAA Platinum standard.

The Rolling Stones released even fewer albums in the 1980’s. All of the band’s albums from this decade were produced on their record label. Their albums from this decade include Emotional Rescue, Tattoo You, Undercover, Dirty Work, and Steel Wheels. Once again, their albums were all extremely popular, still making the top 5 in the charts in countries all around the world and earning the RIAA Platinum status. Richards also began his solo career in 1988 when the Rolling Stones were on hiatus. His first solo album was titled Talk is Cheap. This album was moderately successful.

In 1992, Keith Richards released his second solo album, Main Offender. This album was not very successful. It wasn’t until 1994 that the Rolling Stones released their next album, Voodoo Lounge. Their only other album from this decade was Bridges to Babylon, which was released in 1997. Both of these albums were released by Virgin Records. Both of these albums earned the RIAA Platinum standard. Voodoo Lounge was in the top five on the charts in the US and UK, while Bridge to Babylon was only in the top five in the US.

The Rolling Stones’ only record from the 2000’s was A Bigger Bang, which was released in 2005 with Virgin Records. This record was about as successful as Voodoo Lounge. Richard’s released his most recent solo album, Crosseyed Heart, in 2015, with Mindless Records and Virgin EMI Records. The Rolling Stones’ most recent album, Blue & Lonesome, was released in 2016 with Polydor Records. This record reached #1 on the charts in the UK and was in the top five in the US. It does not have an RIAA rating yet.

In 2010, Keith Richards published his autobiography, Life. This book was co-written with James Fox.

Keith Richards has won some awards and award nominations for being a member of the Rolling Stones. Some of his band’s most impressive awards are listed below.

In the late 1960’s, Keith Richards was arrested for drugs several times. Eventually, he was imprisoned for several months because he was caught with many amphetamine tablets on his person. However, this would not be the last time that he would be in trouble with drugs.

In the late 1970’s, it was discovered that Keith Richards had become addicted to heroin. In 1977, he was caught with more drugs on his person, including cocaine. He was arrested for this and put on trail. Eventually, he settled out of court when he agreed to seek treatment for his addiction in rehab.

Keith Richards married Patti Hansen in 1983. This couple is currently still married and has two children together: Alexandra and Theodora. He also has children with his ex-girlfriend, Anita Pallenberg: Marlon, Tara, and Angela Richards. Sadly, Tara died when he was only a few months old, in 1976.