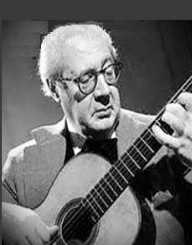 Andres Segovia is famously known as the forefather of classical guitar and as the most talented guitarist in 20th Century. Segovia was born on 21 February 1893 in Linares, Jaen, Spain. He was brought up by his uncle and aunt from age 2 and increased in stature with an ambition to play the guitar.

His Uncle’s desire was that Segovia would pursue law, but Segovia wanted to make music. His tone on the guitar was melodious and impressive which created in him a legend in classical music. Andres Segovia died on June 2, 1987, at the age of 94 in Madrid.

Andres Segovia Torres was a Spanish citizen born in 1893 February 21. He was born in Linares one of the towns in Spain and was brought up in Villacarillo since the age of 2. Segovia spent the most time of his life in Villacarillo where he was sent to live with his uncle, Eduardo.

When he turned six, he began exhibiting remarkable talent in playing the guitar. At the age of ten, the family relocated to Granada where Segovia attended school and also received his guitar. Segovia’s experience with the Flamenco guitarist Gabriel Ruiz de Almadovar inspired him to begin doing individual lessons. He spent most of his time practising by himself until he attained the skill of handling and playing the guitar.

Andres Segovia’s first performance was in 1909 in Granada when he was 16 years old. As years went by, Segovia was privileged to do what would be his first concert in Madrid. He further continued performing in several concerts in different places including Madrid (1912), Paris Conservatory (1915) and Barcelona (1916). In 1919, he toured South America and performed in Mexico in 1923 being his first concert there. He further visited America in 1928 where he met Lobos who was a skillful composer from Brazil.

The two became good friends and were in touch for a long time working together in composing and playing the guitar. He also met another composer and friend in Venice in 1932 by the name Mario Castelnuovo- Tedesco. Segovia performed at Bach’s Chaconne in 1935 and several other concerts through to the 1940s. He also continued with tours to Europe and USA for 30 years when the World War II ended. Even at an old age, Segovia still performed and taught music in master-classes at the University of Southern California in 1986.

Andres Segovia has earned praise and appreciation for being the man behind the classical guitar performances. Segovia also taught several students who also became teachers of music passing the mantle from one generation to another.

For perfect intonation in guitars, Segovia established the use of nylon strings in the place of gut strings. Some of his students include John Williams, Charlie Byrd, Oscar Ghigla, Abel Carlevaro and Philip de Fremery.

Andres Segovia first married Adelaida Portillo in 1918 and later married his second wife Paquita Madriguera in 1935. Paquita was a skillful pianist who had played several piano rolls and recorded them. Segovia spent ten years in a relationship with Olga Praguer Coelho who was a singer and guitarist from Brazil. However, their relationship did not hold longer, and Segovia finally married Emilia Magdalena Corral Sancho in 1962. Emilia and Segovia had a son Carlos Andre Segovia who is also currently the Marquis of Salobrena.

Andres Segovia passed away in 1987, June 2 of hypertension in Madrid, Spain and was laid to rest at Casa Museo de Linares in Andalusia.