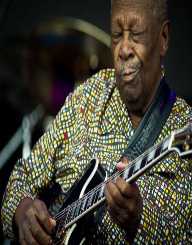 B.B King reigned as the Sovereign of the Blues like any other head of state. How wore his crown with admiration and ever glowing attitude. To him, his talent was meant to educate not only his loved ones but the rest of the world. Even at his middle-aged life, he relentlessly sang and played blues to the brim. He adored his time just as much as he loved his fans. For the rest of his life, B. King didn’t retire, but he used his gift to spread the good news across the globe. Before fame, King came from a decent family where he helped his father to earn daily bread. His determination and zeal in the field of music earned more recognitions and fame. Some of his notable songs include ‘3 O’Clock Blues and Rock Me Baby. Though he closed his eyes in 2015, his fans can’t get enough of him. Read along to understand more about his early and later releases.

Morning glory is a purplish flower that is widely known for its immense growth and slender stems. Similarly, B. B. Kings introspectively rose with a wide array of accessories and decorations. This is in regards to his singing ability. As neat as the morning glory flower looks, B. King flittered himself into negativity and tidiness was his second name. His attentiveness made him wait for his turn just like a well-trimmed flower patiently. Though he stepped out of the world two years ago, his lyrics remind us that he is still in our midst. Read along.

On 16th, September 1925 Riley B. King was first seen in the world in Mississippi, Itta Bena, and Berclair, United States. His protective father was called Albert King, and his mother was known as Nora Ella King. Both of his parents served as sharecroppers at a local cotton estate. Sad to say that King didn’t receive a motherly love since Nora abandon her family while he was still learning to crawl. It was here that his father took him to his great-grandmother. At a young age, Riley showed a profound interest in music. It was at the age of twelve that he received a guitar from his grandma as a birthday gift. With great zeal and determination, Riley learned how to play guitar. Soon, he started to earn from his sweat doing nothing else but signing at local streets. As a young lad, he was given a pseudonym name the Beale Street Blues Boy or B. B.

After a short pause, Riley traveled to Memphis, Tennessee to start his musical journey. Luckily he was invited to showcase his skill at Sony Boy Williamson’s radio program. This is what paved the way for more invites and performances. He was defined as a virtuoso of art and music genres.

Without further ado, Riley started to receive immense offers including earning a few minute spots at Memphis Radio Station. Of course, he did his best to prove to the world that everything was possible. Starting off with a small spot, King gained huge audience leading to the expansion of another program titled Sepia Swing Club.

It was in 1949 that Riley started to record his songs. Though some of his songs didn’t receive much acclaim at first, his fame called in 1952.It was the year that he released his first single titled three o’ Clock Blues. The song cemented the number one Billboard of Blues and Rhythm charts.

Propelling as a staunch musician, B.B King was brought to another world of fame where he opted to tour around the world. By 1950s he received positive acclaims for performing for over a hundred shows in one years’ time.
Soon, King was crowned as the ruler of blues and one of the most notable men when it comes to R&B in 1950s.Some of the well-acclaimed songs that he recorded include Woke up This Morning; Please Love Me, You Know I Love You, You Upset Me and Whole Lotta Love.

Throughout his career and fame, King’s time was always planned, all thanks to his manager Sid Seidenberg who made sure that he had it all. He once sang at the Newport Folk Festival as well as at Bill Graham’s West in the 1960s.His image extended beyond his ability.

From 1970 to 1980 King toured several countries and in the process, he launched his new albums. Some of the notable include To Know You Is to Love You, Midnight Believer, Take It Home, Love Me Tender, King of the Blues, Friends, Midnight Believer, B. B King in London among others.

In 1991 Riley opened his club titled B. B. King’s Blues Club that is located in Memphis. He followed it up with another club named Universal City Walk that is positioned in Los Angles. For the rest of his career, he continued to fathom as before.

Riding with the king was an unforgettable album that B. B. King released in 2000 in partnership with Erick Clapton. The album topped number one on the Billboard Blues Charts. In the end, it receivedMulti-Platinum in the United States.

From 1987 to 2006 B. B. King received a wide array of awards and recognition. Some of them include the Blues Foundation Hall of Fame, Grammy Lifetime Achievements Award, Grammy Awards, and Polar Music Prize, Royal Swedish Academy Award and later an award from the Kennedy Center Honors.

In 1946 B. B King tied a nuptial knot with Martha Lee Denton but they later parted ways in 1952. He then married Sue Carol in 1958 where they called it quit in 1966. According to sources, King is believed to have several affairs that brought forth fifteen children in total. After some time, his health started to deteriorate due to diabetes where he breathed his last on 14th, May 2015 while in his sleep. As a trivia, his subtle trait made him join a non-profit organization called Little Kids Rock.