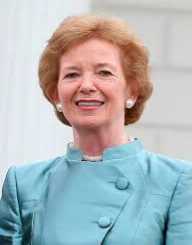 Mary Therese Winifred Bourke was born on May 21, 1944, in the town of Ballina, Ireland. Her father, Aubrey, and her mother, Tessa, were doctors. Many of her extended family members were involved with politics. Her family was Catholic.

Mary Bourke studied at the Mount Anville Secondary School in Dublin. She then enrolled at Trinity College Dublin. She studied law and graduated in 1967.

In 1970, Mary Bourke married a young solicitor named Nicholas Robinson. They had two sons, named Aubrey and William, and a daughter named Tessa.

In 1967, Robinson joined the Irish Bar. Mary Robinson quickly became a member of the Senior Counsel of the Inner Bar. She also became the Reid Professor of Law at Trinity College. In 1969, she was elected to the Irish Senate as an independent senator. She campaigned for issues such as contraception and women’s rights.

In 1990, Mary Robinson became the seventh President of Ireland. She was the first woman ever to hold that job. She was very popular with the people and had a high approval rating. She helped decriminalize homosexuality and make contraception widely available. Despite her liberal views, she managed to maintain a good relationship with the Catholic Church. She also managed to improve the relationship between Ireland and England. She was the first Irish president to hold an official meeting with Queen Elizabeth II. She resigned in 1997, after six and a half years of presidency.

Just a few weeks after resigning, Robinson became the U. N. High Commissioner for Human Rights. She was the Chairman of the Asia Regional Preparatory Meeting in Tehran, Iran. She was the Secretary-General of the World Conference against Racism in Durban, South Africa. She criticized the U. S. for its war on terrorism and its implementation of capital punishment.

Mary Robinson resigned from her position in 2002. In 2006, she signed the Yogyakarta Principles in Indonesia. In 2007, Nelson Mandela started The Elders, an organization of public figures working towards world peace. Robinson became one of the members of this organization. She became a board member of the European Climate Foundation, the Arab Democracy Foundation, and the Association of European Parliamentarians with Africa.

She joined the Club de Madrid, the Aurora Prize, the Clean Cooking Alliance, and the Scaling Up Nutrition Movement. She is the head of the International Commission of Jurists and a Chairwoman of the World Justice Project. In 2012, she released a memoir called Everybody Matters. In 2018, she became the Chairman of The Elders.

Mary Robinson has won the North-South Prize, the Erasmus Prize, the Sydney Peace Prize, the Prince of Asturias Award, the Inamori Ethics Prize, the Otto Hahn Peace Medal, and many other awards. In 2009, President Obama awarded her with the Presidential Medal of Freedom. In 2010, the Order of St Lazarus of Jerusalem gave her the title of Dame Grand Cross of Merit. She has received honorary degrees and doctorates from the University of Cambridge, Brown University, Uppsala University, McGill University, Lisbon Nova University, and the University of Bath.