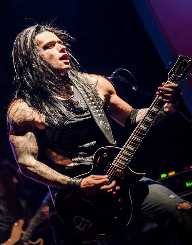 Bill Hudson is a heavy metal guitarist who is from Brazil; he started his career in 2005 with Cellador.

Bill Hudson was born on 13 January 1983 in São Paulo, Brazil. His original name is not known, as he is widely recognized as Bill. He was inspired by Slash’s solo in November Rain music video by Guns and Roses. He started to play guitar using nylon string acoustic and later took lessons from Kiko Loureiro.

Around the age of thirteen, Bill Hudson was exposed to Iron Maiden and moved onto heavy metal music.

Bill Hudson went to the FAAM Music College in Brazil after high school. He wanted to become a conductor, so he did a classical composition degree, he studied multiple vocal harmonies. He dropped out two years of the course and went to Musicians Institute in Hollywood.

Bill Hudson joined power metal band Cellador in 2005; the group was based in Nebraska, Omaha. He moved permanently to America to start his career, where he was the lead guitarist for three years, leaving Cellador in 2008. Aside from playing the guitars, Bill contributed background singing and arrangements for the music,

sometimes conducting the singer when they cut demos. After he left Cellador, Bill became a guitarist for hire.

Bill Hudson briefly joined Power Quest as a co-lead guitarist in 2008, separating with the band ten months later. Bill then moved to play for Circle II Circle band, with Savatage’s singer Zak Stevens. After touring with them, Bill remains on their lineup, although he has been hired to play for other groups.

Bill Hudson made a name playing in Wacken Open Air in Germany during 2012. He performed with Trans-Siberian Orchestra, alongside Jon Oliva and Zak Stevens. Following his performance, the band released Live At Wacken, with him playing in two songs: Seasons Will Fall and Reigh of Darkness in 2015.