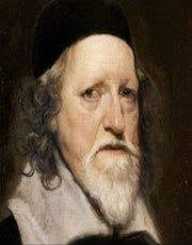 Inigo Jones was born 15th July 1573 in London, England. His father was Welsh, and he worked with textiles, specializing in cloth. The church of St. Bartholomew-the-Less baptized him, but the rest of Jones's early life is a mystery. A wealthy patron sent Jones to Italy, where he studied drawing. The patron noticed how talented Jones was when he saw his sketches.

After leaving Italy, Jones traveled to Denmark. As a result, King Christian employed him to design two of his palaces. One of the palaces was at Rosenborg, and the other at Frederiksborg.

Queen Anne of Denmark was the consort of King James I. She became a patron of Jones, and he became famous in the English theatre. He introduced masque costumes, and he created movable scenery for over 500 performances between 1605 and 1640.

Around 1608, Inigo Jones designed a monument to Lady Cotton. He also completed drawings for other architectural works. These included the New Exchange in the Strand, and a central tower for St. Paul's Cathedral. In 1610, Jones became Surveyor to the Prince of Wales, Henry Frederick.

He then became Surveyor of the King's Works in 1613. Jones then traveled to Italy with the Earl of Arundel. He made sketches and notes as he studied the architecture of several of the major cities. He then returned to England ready to impart what he had learned.

When he returned to England, Jones began his new work with enthusiasm. Jones's work was in high demand. Due to his position of working for the King, though, only select people were able to access his talent.

Some of Jones's work include the Banqueting House in the Palace of Whitehall, and Covent Garden square. He also worked on the Queen's Chapel at St. James Palace, and the new west front at St. Paul's Cathedral.

The Great Fire of London destroyed several of his works. Jones worked for the King for around two and a half decades.

Inigo Jones became a Member of Parliament for New Shoreham in 1621. From 1630 to 1640, he served as a Justice of the Peace. King Charles, I offered Jones a knighthood in 1633, but Jones politely declined.

In 1642, the English Civil War erupted. The King's houses were seized in 1643, and Jones was out of work. Jones lived out his days in Somerset House. He never married, and he died on 21st June 1652.