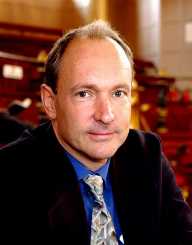 Timothy Berners-Lee was born on June 8, 1955, in London, England. His parents are Mary Woods and Conway Berners-Lee. He also has several siblings.

As a youth, Tim Berners-Lee attended the Sheen Mount Primary School for a short time before attending the Emanuel School until he graduated in 1973.

For his post-secondary studies, Tim Berners-Lee attended Queen’s College at the University of Oxford. He later graduated from this school in 1976.

After graduating from college, Tim Berners-Lee went on to work for Plessey, a telecommunications company. While here, he worked with computers often. He continued to work here until 1978.

In 1980, Tim Berners-Lee began working at CERN, where he continued to work on his computer consulting. He worked here for only a few months. While working here, he made a hypertext program. This program was more for his personal use than for  CERN. Some of what he did here would later be used to make the Internet.

In 1981, he began working at John Poole’s Image Computer Systems, Ltd. He worked in computer tech while here. He also learned many skills while on the job. He created several computer programs, computer software, and other computer technologies while working here. He stopped working here in 1984.

In 1984, Tim Berners-Lee began working for CERN, instead of just independently with CERN. The group was having problems with its method of communication, but Berners-Lee knew the solution. He proposed a new communication system years later in 1989: The World Wide Web. It was meant to be a messaging, information, and general sharing center for the whole world to have access to. His proposal was accepted, and he soon began work on the project.

In 1994, Tim Berners-Lee took the next big step in the evolution of the Internet by creating the World Wide Web Consortium with the help of the Massachusetts Institute of Technology. It was in this group that it was decided that there would be no royalties for the Internet so that everyone could use the internet, or make their own websites, without paying a royalty fee.

Throughout the late 1990’s into the 2000’s, the Internet kicked off. Many companies and individuals made their websites. Some were simple and information based, while others were used for shopping and entertainment. It was during these years when the Internet changed and evolved the most.

In 2006, Tim Berners-Lee began working with the University of Southampton to work on improving the Internet. The goal of this project was to make the Internet easier to use.

Since 2009, Tim Berners-Lee has been working as the director of the World Wide Web Foundation.

All of Tim Berners-Lee awards and accomplishments are due to his work with computers and the Internet. Some of his most prestigious awards are listed below.

Tim Berners-Lee is a Commander of the Order of the British Empire (since 2004).

Tim Berners-Lee is a member of the Royal Society, the British Computer Society, and the American Academy of Arts and Sciences.