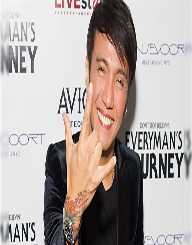 Filipino singer-songwriter Arnel Pineda was born on the 5 September 1967 in Tondo, Manila in the Philippines. His parents were Josefina Manansala and Restituto Listing Pineda. Pineda’s mother encouraged her son’s musical talent and recognized his singing ability. As a young boy, both his parents helped him to take part in singing competitions. Then when he was thirteen years old, his mother died.

Because the family was suffering from poverty, Arnel Pineda left school not long after his mother died.

For a couple of years after his mother died, Arnel Pineda lived on the streets and eked out a living by doing odd jobs. At the same time, his interest in singing continued, and by 1982 he was the lead singer with a local group Ijos. The band members later formed Amo and in were the winners of the Rock Wars band contest in the Philippines in 1986. In 1988, the band won the Philippines section of the Yamaha World Band Explosion. The band gigged around the Philippines and became well-known, opening for Robert Palmer when he toured in 1989. By 1990, the band had regrouped once again, calling themselves Intensity Five. They entered the Yamaha World Band Explosion, and this time Pineda was voted Best Vocalist with their group being the first runner-up.

At the end of 1990, Arnel Pineda formed a new band New Age. In 1991 Pineda was talent scouted, and their group relocated to Hong Kong where the band played regularly in a restaurant known as Grammy’s. Later, also in Hong Kong, the band changed their name to The Rolling Bones and gigged at a horror-themed nightclub in Hong Kong.

Arnel Pineda was signed up by Warner Bros Records and recorded his first album, Arnel Pineda. He continued playing with his band members in various groups, and in 2006 he moved back to the Philippines. Together with guitarist Monet Cajipe, he formed The Zoo. Filipino television director and talent manager Bert de Leon then signed them to his company, Sundance Entertainment Corporation. The Zoo performed regularly in Manila and Olongapo, and in 2007 their first album Zoology was released.

Youtube videos of The Zoo playing covers songs by various bands including The Eagles, Led Zeppelin, Air Supply, and Aerosmith, led to Pineda receiving an invitation to audition for the US band Journey in LA. The audition was successful, and in February 2008, Pineda made his first appearance as the lead singer of Journey. Pineda’s first album with Journey was Revelation (2008) which debuted on the Billboard Top 200 album charts at number 5. Arnel Pineda toured throughout Europe, the US, China, the Philippines, and Japan with Journey. Journey’s second album with Pineda as their lead singer, Eclipse, was released in 2011.

A documentary Don’t Stop Believing: Everyman’s Journey (2012) focused on Journey’s Revelation tour and Pineda’s experience into stepping into the role of lead singer with the band.

Arnel Pineda has four children. Two sons from previous relationships, Angelo and Matthew as well as a son and a daughter with his wife Cherry whom he married in 2001.