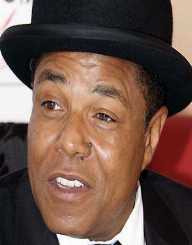 American singer and songwriter Jackie Jackson was born as Sigmund Esco Jackson on May 4, 1951, which happened to be the 21st birthday of his mother Katherine Jackson, in Gary, Indiana, an industrial city outside East-Chicago, United States of America. He was the second oldest of the nine children of his parents Joseph and Katherine Jackson. Hailing from an African-American working-class family, Jackson was raised in a three-room house along with all his eight siblings. At age 4, he and his five-year-old sister Rebbie started taking Jazz-Ballet, Tap and dance lessons. Having perceived the extraordinary musical talents of his wards over the years, Jackson’s father started imparting music lessons to his offsprings, when Jackie was just nine years old.

In 1964, Joseph founded a singing group comprising all his five sons, his three older sons, Jackie, Tito and Jermaine assuming the role of the vocalists and the two younger sons, Marlon and Michael, helped in playing assorted percussion instruments. The neighbourhood children peeked in curiously through their windows while the Jackson children were busy rehearsing their skills with an assiduous regularity. Besides being a diligent member and original frontman of the Jackson Group, Jackie Jackson also played basketball and football. He even contemplated pursuing a career in professional baseball.

The newly formed singing group of the Jackson brothers, named the Jackson 5, won a talent contest when Jackie was 12 years old. They sang the Temptations hit song “My Girl” in the contest. The group made their professional debut in an Indiana nightclub shortly afterwards. The owner of the nightclub, Keith Gordon, impressed with the musical prowess of the group decided to give them a chance to record in his studio. The Jackson 5 later went on to become the most famous child musical group in history with an estimated worldwide sale of 250 million records.

In 1969, the Jackson group signed a deal with the legendary Motown Records and released their first single "I Want You Back" with huge immediate success. The song quickly became No. 1 hit and sold more than two million copies in its initial year of release. Success came pouring in in their successive releases also with singles such as "ABC," "The Love You Save" and "I'll Be There" hitting the top of the chart with surprising regularity. In no time, Jackson 5 became the most popular band and a household name in the world of music having achieved the rare distinction of releasing four consecutive number one hits by any musical group ever.

Jackie Jackson recorded his first solo album, self-titled ‘Jackie Jackson’ in 1973. With his signature high voice, the elegance of his singing was in full bloom on songs such as “Love Don’t Want to Leave,” “Do I Owe,” and “You’re The Only One.” However, though the songs were appreciated by the fans worldwide, it failed to reach the level of commercial and critical success, his group had achieved so far.

Like his brother, the legendary Michael Jackson began pursuing his highly successful solo singing career, Jackie’s importance as the lead vocalist of the group increased multifold. The group’s 1984 album Victory contained the song ‘Wait’, where Jackie performed the role of the lead vocalist and was responsible for composing the single ‘Torture.’ In the same year, all the members of the original Jackson 5 performed together for the last time in their highly victorious World Tour.

Michael Jackson announced his decision to leave the group and go solo during the last leg of the Victory World Tour in December 1984 in Los Angeles. Another brother Marlon also left the group in early 1985. After the departure of these two brothers, Jackie, Tito, and Randy started performing the role of session musicians, vocalists, and producers, all at the same time.

The quartet of the remaining four brothers, Jackie, Tito, Randy, and Jermaine recorded the theme song of the film Burglar titled "Time Out for the Burglar" in 1987. Their final Epic album ‘2300 Jackson Street’ was released in late 1988 where Jackie and Jermaine shared the role of the lead vocalist on most of the songs. After that, all the brothers of the Jackson group went to solo projects disintegrating the group and dropping the name of the group from the label.

His second solo album, titled ‘Be the One’ was released in late 1989 by Polygram after a hiatus of 16 years. The album garnered moderate success with two of his releases entering the charts and remained there for the next 18 weeks. All the brothers of the group reunited in 2001 to perform together at the 30th anniversary special of Michael Jackson at Madison Square Garden.

Jackie Jackson is the current CEO of the Futurist Entertainment and its JESCO Records division.

Jackie Jackson married his first wife Enid Spann in November 1974. Their marriage was a turbulent one, having been separated for several months after their marriage. They later reconciled and had two children before their eventual divorce in 1987. He married Victoria Triggs in 2001 and got divorced later. His third wife is Emily Besselink, who gave birth to twin boys in 2013.

Jackie was rumoured to have dated pop star and choreographer Paula Abdul, widely known as the ‘Laker Girl’ during the late 1980s. His the then wife Enid tried to run over him with her car after spotting the duo engaged in an intimate way. The injury suffered by Jackie was declared to have been caused by an automobile accident, and the real reason was never divulged though there was intense media speculation about the incident at that time. Jackie presently resides in Los Angeles, California.