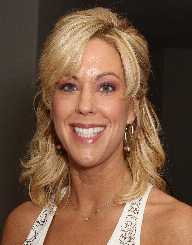 Kate Gosselin is an American reality star and Television personality born on March 28th, 1975. She featured in Jon & Kate Plus 8, and she is best known for it. Besides being a TV personality, Kate Gosselin has also written many books. Among these books are Multiple Blessings which was published in 2008. Also, Kate Gosselin has worked in hospital delivery as a registered nurse. She has eight kids herself. Kate competed in the tenth season of Dancing with the Stars but lost to Nicole Scherzinger.

Kate Gosselin was born on March 28th, 1975. Her place of birth is in Pennsylvania, Philadelphia in the United States. She is the daughter of Kenton Eugene Kreider and Charlene Ruth Kreider. Kate has three sisters, Kendra, Christen, and Clairissa. She also has a brother called Kevin.

Kate Gosselin attained a diploma in Nursing from the Reading Hospital and Medical Center located in Reading, Pennsylvania. After that, she was employed in Wyomissing, Pennsylvania as a labor and delivery nurse.

The programs received positive views from audience hence high ratings. As a result, in 2007, the family was signed to Jon & Kate Plus 8, by Discovery Health. This was a reality series which premiered that year.

Following the divorce of Kate Gosselin and Jon, the reality TV Show had to change to Kate Plus 8. It would then feature Kate ad a divorced mother. However, Jon would make appearances in the show once in a while. The show concluded its first season on November 23rd, 2009.

Among the books, Kate Gosselin has written three non-fiction book. Her writing career premiered with Multiple Blessings. She authored the book along with Beth Carson and Jon Gosselin. It was published in November 2008. The book is position five among the list of The New York Times Best Sellers. Also, by the end of 2009, it had sold more than 500000 copies.

In April 2009, her second book was released with the title Eight Little Faces. Subsequently, she wrote her third book I Just Want You To Know. It was released in April 2010. However, this was not as successful as the previous books. Still, it was position 103 among The New York Times Best Sellers.

In June 1999, Kate Gosselin wedded Jon Gosselin and divorced him in June 2009. Among her children are Hannah, twins (Clare and Madelyn), Joel, Collin, Aeden, Leah, and Alexis. In 2015 she was involved with Jeff Prescot, the millionaire.