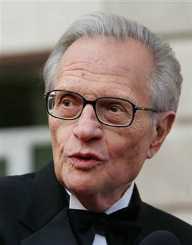 Lawrence Harvey Zieger best known as Larry King is a veteran American television and radio host. Larry has carved a niche for himself as one of the topmost hosts in the world. Born on November 19, 1933, Larry had a humble beginning working as a local journalist and radio interviewer in Florida in the 1950s and 60s but with hard work and dedication rise to the top. In 1978 he became known for his all-night radio broadcasting and went on to host the Larry King Live on CNN an evening interview television program from 1985 to 2010. After CNN, he went on to host the Larry King Now on Hulu and RT America weekdays as well as Politicking with Larry King on Thursday evening. He is a two-time Peabody award winner and has won the Cable ACE Award on ten occasions.

Larry King was born on November 19, 1933, in Brooklyn, New York to Jennie and Aaron Zieger. His father was a restaurant owner and defence plant worker and mother, a garment worker. Larry had his education at a public school, Lafayette High School in New York City. When he was in high school, he lost his father to a heart attack which had an adverse effect on his education and eventually lost interest in schooling. To support his single man and other siblings, King picked up some jobs and had the desire to work on radio in the future.

Picking up odd jobs to support the family, Lawrence Harvey Zieger came into contact with a CBS whom he expressed his desire to work on the radio to for him to suggest to Larry to them move to Florida. Florida was at the time growing market in the broadcasting industry and therefore needed broadcaster experienced or not. Zieger then set for Miami and after some ups and downs got his first radio job. He wasn’t hired by the radio station WAHR in Miami Beach not as a broadcaster but as a cleaner and doing the varied task.

In 1957, he made a debut on radio as a disc jockey playing from 9 am to noon and also served as an afternoon newscaster and sportscaster. He only came up with King when the station’s general manager Marshall Simmonds suggested he pick a radio name since the Zieger was difficult to remember therefore his choosing of Larry King. According to him, he picked King after seeing the King’s Wholesale Liquor ad in The Miami Herald. Two years afterward he adopted the name legally. Larry started his trademark interview work by interviewing people at the Pumpernik’s restaurant in Miami Beach for WIOD mid-morning show.

His first celebrity interview was to singer Bobby Darin when he was in Miami for a concert. King gaining local popularity also hosted WPST-TV Channel 10’s (now WPLG) Miami Undercover which discussed relevant issues on the day on Sunday nights 11:30 pm. King lost all his jobs including that of WIOD and WTVJ in 1971 after being accused of theft by his former business partner which caused his subsequent arrest. The charges were later dropped and was rehired WIOD where he later hosted the sports talk show, Sports-a-la-King.

Larry King in 1978to 1994 successfully hosted the night Mutual Broadcasting System coast-to-coast broadcast which was broadcast live from Monday to Friday midnights to 5:30 am Eastern Time. The program devoted 90 minutes to guest interviewing, 90 minutes to callers to ask questions and later at 3 am allow callers to speak to topics they desire. He would later come in with the Open Phone America segment to express his political opinions. The program was picked by other stations either on live or delay plays.

With his growing presence and popularity in the media landscape, Larry King started his Larry King Show on CNN in June 1985. Topics discussed where wide range and the program attracted prominent figures in politics, entertainment among others. He ran the show concurrently with his Mutual Radio program. His easy-going approach when asking questions and the non-confronting approach attracted controversial and popular figures who would always want to make their case without been interjected or confronted. For more than two decades he would be interviewing over 30,000 leading figures of his time including President Vladimir Putin of Russia. He left the show in 2010 but did special occasions for CNN until 2012.

Larry King has married eight times first to Freda Miller his lover from high school in 1951 when he was just 18. However, after a year of marriage, parents of both families requested the marriage be annulled since the couple was too young. He later married Annette Kaye and had a son, Larry Jr in 1961 but that also ended in divorce a short while. King’s third wife was Alene Akins in 1961 and divorced in 1963. That same year, he married Mary Francis Mickey Stuphin and that also ended in a divorce.

He then went back to his ex-wife Alene Akins and had his second child Chaia in 1969 and once again divorced in 1972. His fifth wife was Sharon Lepore in 1976 and divorced in 1983. He married a businesswoman Julie Alexander in 1989, separated in 1990 and finally divorced in 1992. King’s long list of marriages and subsequent divorce includes engaging actress Deana Lund in 1995 but did not marry her. He later married actress and TV host Shawn Southwick and had two children Chance and Cannon and also had Danny Southwick as his stepchild. In 2010, the couple filed for divorce but later came back together. He is an atheist.

Larry King has gained several recognitions in the form of awards for his broadcasting work. He has two Peabody Awards one for radio in 1982 and for television in 1992. He has also received 10 Cable ACE awards Best Interviewer and for Best Talk Show Series. His other awards include the Scopus award, in2009 he received the Golden Mike Award for Lifetime Achievement by the Radio & Television News Association of Southern California and Snuff Candle award among several others. He was inducted into the National Radio Hall of Fame in 1989 and the Broadcaster’s Hall of Fame in 1996. He has honorary degrees from institutions like Brooklyn College, City University of New York, George Washington University and the Columbia School of Medicine. Bradley University also honored him with an honorary degree of Doctor of Humane Letters.

King referred to Miss Pennsylvania, Marla Wynne as the ugliest contested in the Miss American pageant during an interview with Rivers on The Joan Rivers Show in September 1990. He had served as a judge for the pageant on September 8, 1990. He later sent a telegram as well as long-stemmed roses to apologize to her for that comment.