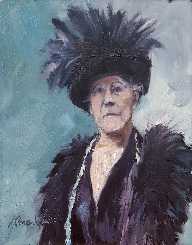 Mary Cassatt was born on May 22, 1844, in Allegheny, Pennsylvania, USA. Her parents were Robert Cassatt and Katherine Johnston. She was a part of a large family, in which she had six siblings.

As a young girl, Mary Cassatt developed her love of painting as her family traveled around Europe. Her parents were financially well off. They believed that traveling was a great way for their children to learn. Mary Cassatt loved Europe so much that she later moved to France once she became an adult.

When Mary Cassatt was a young adult, she enrolled in the Pennsylvania Academy of the Fine Arts. Her family did not approve of her studying art at first, (as they had raised her to focus on being a wife and mother) but that didn’t stop her. She later left the school, as it did not treat women as well as they treated men. Mary Cassatt was a feminist, and she wasn’t going to stand for being treated differently from the male students at the school. Soon after leaving school, she moved to France, where she studied under other famous painters.

When Mary Cassatt was in her early 20’s, she took painting lessons with Charles Chaplin, Jean-Leon Gerome, and Thomas Couture who were famous painters at the time. After her training, and after the start of the Franco-Prussian War, she moved back to the United States in 1870. Many of her paintings were later tragically destroyed in the Chicago Fire of 1971.

In 1871, Mary Cassatt was hired to make a commission that got her back on her feet. An archbishop needed to her make copies of other paintings, which she gladly did. This project gave her enough money to leave the United States again, and in the same year, Mary Cassatt moved back to Europe and continued with her painting career. After many unsuccessful attempts, one of Cassatt’s paintings, Two Women Throwing Flowers During Carnival, was accepted into the Paris Salon (a sort of art gallery) and was sold a year afterward. After this sale, her name spread throughout Europe, and her work was wanted in many countries.

Mary Cassatt’s paintings usually dealt with one major theme: mothers and their children. She began painting in the traditional impressionistic painting style. In this style, artists aim to paint what they see, more or less as they are, but still in the artist’s style. Painting like these is often portraits, still life, or scenery.

In 1984, Mary Cassatt opened her painting studio in Paris, near her home. She had recently settled in France permanently, after touring through several European countries, and she was now working harder than ever to make a name for herself. Soon after she settled in France, she was asked to join an elite group of painters called, The Impressionists. In the group, she improved upon the impressionist art styling that she had been using for years. Also while in and outside of the club, she worked to mentor artists and provided her art, and suggestions for others’ art in various art collections. Some of her famous paintings are listed below.

In 1904, Mary Cassatt was awarded the Legion d'honneur for her artistic skills.

Although Cassatt’s artwork was mainly on the topic of mothers and children, she never married. Mary Cassatt put her career before starting a family. However, she did work to take care of her parents and sister after they moved to France.

Mary Cassatt kept painting until she was very old. However, some medical conditions got in the way of her art. Some of her conditions like diabetes did not influence her work much. However, in the 1910’s, she began suffering from rheumatism and cataracts, which made it difficult for her to paint. Near the end of her life, around the 1920’s, she became completely blind.

Mary Cassatt died on June 14, 1926, in Le Mesnil-Theribus France. She was 82 years old when she passed away.