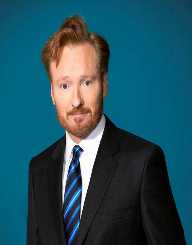 Conan Christopher O’Brien is an American comedian, talk show host, and producer. Born on April 18, 1963, he has hosted the Late Night with Conan O’Brien (1993–2009) and The Tonight Show from 2009 to 2010. Since 2010, he has been hosting Conan in the TBS cable channel. O’Brien started a career as a writer and wrote for several comedy shows. He later joined Saturday Night Live as a writer. Subsequently, he became a writer and producer for The Simpsons serving for two sessions. In 1993, O’Brien replaced David Letterman as host of Late Night show. He hosted the show until 2009. Following that, he hosted The Tonight Show for seven months and currently hosts Conan. O’Brien has also hosted events like Christmas in Washington and the Emmy Awards.

Conan Christopher O’Brien was born on April 18, 1963, in Brooklyn, Massachusetts. He was the third of six children to Thomas Francis and Ruth O'Brien (née Reardon). His father was a physician and professor of medicine at Harvard Medical School, and his mother worked as a lawyer. Growing up O’Brien exhibited great comedy talent and developed an interest in entertainment. O’Brien received education at Brookline High School. While there, he worked with the school newspaper, The Sagamore, as managing editor. O’Brien’s short story, "To Bury the Living" won the National Council of Teachers of English writing contest during his senior year. He graduated in 1981.

After graduating from college, O’Brien moved to Los Angeles. There, he worked as one of the writing staff of HBO’s Not Necessarily the News. He also served as a writer on The Wilton North Report. During his two years stay, O’Brien performed with improvisational groups including the Groundlings. His next position was a writer for the late-night show, Saturday Night Live in 1988. His three years on the show saw the creation of recurring characters like Mr. Short-Term Memory and the Girl Watchers. O’Brien and other writers of the show received an Emmy Award in 1989.

O’Brien later joined The Simpsons as a writer. The show was about an unusual suburban family. The show became very popular and successful propelling O’Brien into a supervising producer position.

In 1993, David Letterman decided to move his late-night talk show from NBC to CBS. Therefore, NBC recruited O’Brien a replacer for the time slot. This gave birth to Late Night with Conan O’Brien, which premiered in September 1993. The show received unfavorable reviews with some critics attacking O’Brien personality. Some accused him of being inexperienced and nervous for the camera. As a result, NBC at a point decided to cancel the show. However, O’Brien gradually won the heart of the audience and built loyal viewerships over time. In 2007, the show won an Emmy for writing. The last episode of Late Night with Conan O’Brien aired in February 2009.

In June 2009, O’Brien replaced Jay Leno as host of The Tonight Show on NBC. After just seven months of taking over the show, Leno returned to take over the show. The rating of the show had dropped significantly over O’Brien took over. Per his contract with NBC, he could not return to television for six months after the termination of his contract. As a result, he embarked on some live comedy tour. These tours resulted in the documentary Conan O’Brien Can’t Stop, (2011). After the six months elapsed, O’Brien started hosting the late-night television talk show Conan on the cable station TBS in 2010. In 2019, the show had its duration shortened from one hour to 30 minutes due to declining ratings.

O’Brien has lent his voice to several animated works. He lent his voice to the character classic Batman villain the Riddler in The LEGO Batman Movie (2017). He has also appeared on some television shows and films.

In 2002, Conan O’Brien married Elizabeth Ann Powel in Seattle. They have two children, Neve and Beckett.