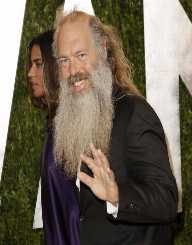 Rick Rubin was born on March 10, 1963, in Long Beach, New York, USA. His parents are Linda and Michael Rubin.

As a teenager, Rick Rubin attended Long Beach High School. While there, he began honing his musicals skills. It was around this time that he began playing the guitar. He also had a band with some of his friends, but the band did not get popular while Rubin was in high school.

Rick Rubin attended classes at New York University. While there, he formed his own record label, which he called Def Jam Records. With his own recording company, he was able to produce a single with his band. However, it did not sell well.

In the 1980’s, Rick Rubin focused on his self-made career at Def Jam Records. When the company was in its infancy, Rubin focused on producing hip-hop and rap music. One of the first musical artists that he produced for was T La Rock, and LL Cool J. Many other hip-hop artists got their start at Def Jam Records. During the 1980’s, Def Jam also worked with other record companies, including Columbia Records, to reach a wider audience.

In the late 1980’s, Def Jam Records began working with rock and roll artists as well. Some of the most famous artists that produced records with Def Jam around this time include Aerosmith and The Cult. However, before the end of the decade, Rick Rubin and his partner at Def Jam split. His partner took Def Jams, while Rubin created Def American Recordings (which later changed its name to American Recordings).

With his new recording company, Rick Rubin continues to work with rock bands. He also began producing things other than music, like comedy albums. Many of the artists he worked with in the early 1990’s helped to bring success and fame to his new company. However, the biggest artist that he worked with early on (who gave the most popularity to the studio) was Johnny Cash At the time that Cash worked with Rubin, his career wasn’t going well. Rubin encouraged him to make cover songs, which helped to make him popular with young people.

In the 2000’s, Rick Rubin continued to work at American Recordings. However, in 2007, he also began working at Columbia Records as the co-head. Some of the artists and bands he worked with while at this company were Linkin Park and Adele. However, he later left Columbia to focus on his own recording company in 2012.

In 2012, Rick Rubin purchased Shangri-La Studios. This studio was famous for producing famous artists, like Bob Dylan, decades ago. One current famous artist who produces her music at this studio now is Adele.

Over the course of his career as a music producer, Rick Rubin has also appeared in many videos either in cameos or just acting as himself. These include music videos, like for the songs “99 Problems) by Jay Z and “Twisted Transistor” by Korn. He has also appeared in the documentary; I am Johnny Cash, as well as several other non-fiction recordings.

Over the course of Rick Rubin’s career as a producer, he has earned several Grammy awards, and even more Grammy nominations. Some of his most impressive Grammy awards are listed below.

Best Country Album (Unchained and Taking the Long Way)
Record of the Year (“Not Ready to Make Nice”)
Best Rock Album (Stadium Arcadium)
Producer of the Year, - Non-Classical - 2007 and 2008
Album of the Year (21)