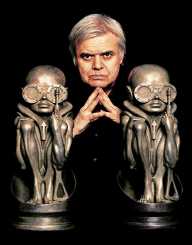 H.R Giger profoundly Hans Rudolf Giger was born on February 5, 1940, in Chur, Graubünden, Switzerland. He was born to Melly Giger-Meier and Hans Richard Giger. He was brought up alongside his sister Iris. In 1944, he was exposed to art, Cocteau’s film ‘beauty and the beast’ through magazines from American soldiers who rested at his home.

In 1946, H.R Giger attended Catholic Mareinheim as his first school before transferring to Auntie Grittli’s Reformation kindergarten. In 1958, he obtained a certificate in drawing after his graduation from high school. He then underwent practical training for a couple of years from an architect and developer. He then completed his military college course as a mortar gunman. In 1962, he joined the School of Applied Arts in Zurich. In 1965, he graduated from the Department of Interior and Industrial design.

In 1966, H.R Giger worked as an office furniture designer for Andreas Christen. He produced ink drawings, oil paintings and his first polyester sculptures at his leisure time. In 1968, he designed his first extraterrestrial being after quitting his job and dedicating all of his time to creating art. In 1969, his first collection of posters was printed by Switzerland’s first poster printing company. In 1969, he had his first work exhibition outside Zurich.

In 1973, H.R Giger was commissioned by Emerson Lake and Palmer rock band to create the cover of the ‘Brain Salad Surgery.’ In 1976, he was commissioned by Alejandro Jodorowsky, a filmmaker to collaborate as part of the production team of the ‘Dune’ where he designed the Harkonnen sci-fi world. In 1977, Ridley Scott a ‘Necronomicon’ director hired him for the production of ‘Alien’ a science fiction film.

In 1988, ‘H.R Giger,’ his first total environment design was opened in Tokyo but later disappointed in the execution. In 1992, he then supervised the interior design and second reopening of a bar in Chur. In 1996, his official internet site www.HRGiger.com was launched. In 1998, H.R Giger museum four-storey was opened in Chateau St Germain, a Medieval walled city of Gruyeres in Switzerland where the most extensive world collection of his artwork was housed.

In 2003, H.R Giger witnessed the grand opening of the H.R Giger Museum Bar which consisted of Giger’s Grotesque, beautiful designs. In 2004, his retrospective work brought him honors from major museums around the world. He continued his complimented work till death leaving behind unknown, unfinished and unreleased projects.

In 1980, H.R Giger received an Academy Award for Best Achievement in Visual Effects. In 2004, he received ‘La Medaille de la Ville de Paris’ a prestigious award as an award of honor in the Paris City Hall. In 2013, he was then inducted to the Fiction and Fantasy Hall of fame.

In 1975, H.R Giger's fiancée Li Tobler committed suicide. In 1979, he married his first wife Mia Bonzanigo with whom they divorced in 1981. In 2006, he married his second wife, Carmen Maria Scheifele. On May 12, 2014, he succumbed after short hospitalization from injuries he got after a fall from the stairs at his Zurich home. He died at the age of seventy-four.