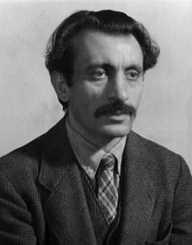 Arshile Gorky was an Armenian artist who is best known for his influence on postimpressionism art and abstract art.

Arshile Gorky was born on 15 April 1904 in Khorgum in the Ottoman Empire. His father moved to America to avoid being drafted into the Turkish Army. Gorky and the rest of the family stayed behind. They were forced to flee during the ethnic cleansing of Armenians by the Ottoman Empire in the Armenian Genocide.

Gorky’s mother was one of the thousands who died of starvation as they fled Ottoman forces. Gorky traveled to America in 1920 and was reunited with his father. In America he changed his name to Arshile Gorky and claimed to be from Georgia, he was born named VostanikManougAdoian.

Arshile Gorky first settled in the city of Boston and attended the New School of Design. He moved to New York in 1924 and became influenced by the French artist Paul Cézanne and Postimpressionism. In New York, he studied at the National Academy of Design and the Grand Central School of Art.

Gorky would get work teaching at the Grand Central School of Art next year. In 1931, sent some works to the Downtown Gallery in New York and they were exhibited under the name Gorki. Gorky’s early work was not well received, and he was criticised for his lack of originality due to his style being similar to Cézanne. Gorky defended his work saying it was important to preserve tradition.

Arshile Gorky was one of the first artists to be employed by the Works Progress Administration Federal Art Project. He held his first solo exhibit in 1935 at the Guild Art gallery. This exhibit showed off Gorky’s drift towards an abstract style. Some of his well-known works from this period were Nighttime and Enigma.

Gorky developed a reputation and began to socialize with the Surrealist movement which was made up of European artists, many of whom were exiles. André Breton and Roberto Matta were two of the artists he collaborated with. Their influences are seen in his work; The Liver is the Cock's Comb. Gorky’s work also drew from his memories of his childhood.

Arshile Gorky and his family had lived on the banks of Lake Van. Gorky would often paint landscapes that drew from his memory of the nature surrounding Lake Van. His work by the 1940s was outrightly surrealist and was characterized by its sensuality and landscapes. The majority of Gorky’s work was exhibited in New York, but he also had his works exhibited in the Modern Art Museum in Fort Worth, Texas, the Tate Modern in London and the Art Institute of Art in Chicago.

Arshile Gorky had some close relationships with many artists, Corinne West, in particular, is viewed as being an early use of Gorky and he proposed to her numerous times. Gorky married Agnes Magruder in 1941. They had two daughters together, but their marriage was unhappy. Magruder had an affair with Gorky’s friend Roberto Matta and left Gorky in 1948. Gorky hanged himself on 21 July 1948.