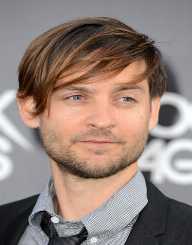 American actor and producer Tobias Vincent “Tobey” Maguire was born on June 27, 1975, in Santa Monica, California. His mother Wendy was a secretary who later became a screenwriter and film producer. His father Vincent was a cook and also worked in construction. Maguire’s parents were not married when he was born. They married the following year after his birth but got divorced when Tobey was only two years old. Maguire has four half-brothers. He spent his childhood in-between both parents, which meant a lot of moving.

From an early age, Maguire wanted to become a chef. When he was in the sixth grade, he tried to take classes in home economics. His mother wasn’t pleased with the idea, and she offered him $100 to take drama classes instead. Constant moving was emotionally hard on Maguire. He dropped out of high school his freshman year and never returned. Maguire decided to pursue an acting career.

Toby’s first appearance as an actor was in 1989 in The Wizard. He played one of the goons and had no lines in the movie. In the 1990’s he worked as a child actor for roles much younger than his actual age. When he was 20, he was still taking roles as a teenager. Toby Maguire appeared in various TV commercials and TV movie roles. He starred along with Chuck Norris in Walker, Texas ranger and was cast as the lead actor in Great Scott!, but the show was canceled only after five weeks.

On a lot of occasions, Toby Maguire was auditioning opposite another rising talent, Leonardo DiCaprio. Both became very good friends and made a pact to help each other out in their careers. In 1993, DiCaprio was cast in the movie This Boy’s Life, and upon his suggestion, Maguire played one of his character’s friends. Maguire was leading a very hard-partying lifestyle. He even requested to be released from the movie Empire Records. Maguire realized his problem and joined Alcoholics Anonymous.

When Toby Maguire was recovering from alcoholism, he decided to take a different career path and no longer auditioned for the same roles as DiCaprio. His choice led him to obtain many roles as the lead character. He played Paul Hood in the 1997 The Ice Storm, and also starred in Pleasantville, The Cider House rules, which earned 7 Oscar nominations.

One of his most notable roles from the times was in the Ride with the Devil. In 2001, he voiced the beagle puppy Lou in Cats & Dogs. His big break came in 2002, when he starred as the Marvel Comics superhero Spider-Man. The film had two sequels and a video game, which was voiced by Maguire. His performance earned Maguire excellent reviews.

Toby Maguire’s next project was starring as the jockey John M. Pollard in Seabiscuit. He also took the role as a villain Corporal Patrick Tully in Steven Sodenberg’s The Good German. The film received an Academy Award.

Maguire’s production projects include 2002 movie 25th Hour, Whatever We Do and also Seabiscuit. After producing the 2012 film Good People, Maguire established his own production company Material Pictures.

In 2009, Toby Maguire starred in the drama Brothers along with Jake Gyllenhaal and Natalie Portman. For his performance, he received a Golden Globe nomination. Maguire and DiCaprio performed together once again in the 2013 film Great Gatsby. DiCaprio starred in the title role, but Maguire played Nick Carraway and narrated the film.

Toby Maguire became a vegetarian in 1992, and in 2009 he became a vegan. He has been sober since he joined Alcoholics Anonymous at 19 years of age.

In 2003, while shooting the Seabiscuit, Maguire met jewelry designer Jennifer Meyer. They became engaged in 2006, and a couple of months after, their daughter Ruby was born. The couple married in Hawaii, in 2007. They also have a son Otis in 2009. In 2016, Maguire announced separation.

Toby Maguire has also been known as a skillful poker player. He started to play tournament poker in 2004. Maguire was tutored by the professional player Daniel Negreanu. Since then, Maguire has been featured on ESPN in 2005, 2006 and 2007 World Series of Poker Championships.