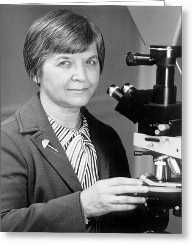 Research chemist and inventor Stephanie Louise Kwolek was born on the 31 July 1923 in New Kensington, PA. She was the children of Polish immigrants to the United States. Initially, she wanted to be a doctor, but family finances did not allow for medical school. Instead in 1946, she graduated with a degree in chemistry from Carnegie Mellon University in Pittsburgh.

Her first job was working for DuPont's in Buffalo, later working at their Wilmington laboratory.

Stephanie Kwolek graduated with a science degree from Carnegie Mellon University in Pittsburgh in 1946.

In the 1960s, Stephanie Kwolek’s work got noticed because of her research into long molecule chains at low temperatures. Stephanie Kwolek discovered a liquid crystalline polymer solution which was incredibly strong, and this led to a synthetic material which is five times as strong as steel. This material became known and was patented as Kevlar. Kevlar is flame resistant and is used in bulletproof vests, safety helmets, camping gear, bulletproof limousines, fibre optic cables and many other products.

The invention of Kevlar allowed for the manufacture of bulletproof vests. Stronger and lighter than steel, DuPont estimates that over 3,000 police officers lives have been saved because of Kwolek’s invention. (New York Times).

Stephanie Kwolek was working in a research team at DuPont’s laboratory in Wilmington on a project to develop a lightweight fibre with enough strength to replace steel in radial tires. In 1964, she was attempting to convert polymer and instead of the expected result, found a thin opaque liquid. She later said that it was a case of serendipity that when spun, the opaque liquid she had discovered, turned into a strong, stiff fibre. Testing showed the fibre to be fire resistant and as strong as steel. DuPont immediately recognized the significance of Kwolek’s discovery. After DuPont had invested millions into further research and development, Kevlar was introduced to the market in 1975.

While working for DuPont, Stephanie Kwolek invented Kevlar, a bulletproof fibre that has saved many lives.

Awards won include the Lemelson-MIT Lifetime Achievement Award and the National Medal of Technology (1996).

Although Stephanie Kwolek invented Kevlar, she did not benefit financially from the invention. As part of her employment contract, she had handed over all rights to royalties to her employer, DuPont. The company has benefited to the tune of billions of dollars from her invention.

She never married and in later life used to do tutoring and was an advocate for encouraging young girls to study science.