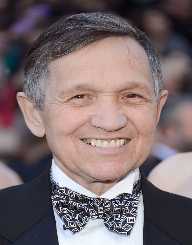 Dennis Kucinich is an elected official of the democratic party and was a candidate as the state of Ohio's governor this 2018; he served as the U.S. Representative from Ohio's 10th district from January 3, 1977, to January 3, 2013, of which he was later succeeded by Mike Turner.  Back in 2004 and 2008, he was an open nominee as president for the said year's Presidential elections.

Dennis Kucinich was married three times: his first wife Helen, which he divorced and then married his second wife, Sandra Lee McCarthy on 1977. McCarthy gave birth to their child Jackie four years later. In 1986, the two split up, and Kucinich married for the third time in 1986 to British citizen Elizabeth Harper in the summer of August 21, 2005.

On the 8th of October 1946, Virginia Kucinich gave birth to her eldest child, Dennis, in Cleveland. His father, Frank, worked as a truck driver and is of Croatian descent.

Dennis Kucinich was a graduate of Cleveland State University and took a degree in speech and communication in Case Western Reserve University.

At the age of twenty-three, Kucinich was elected as an official in Cleveland City Council in 1969 of which before that he also ran for office back in 1967 but to no avail.

The following elections of 1972, he then again ran for a seat in the House of Representatives but ultimately lost to William E. Minshall Jr., a Republican, in a neck and neck contest; he ran again for the same seat in 1974 but lost to Ronald M. Mottl. The following year, Kucinich served as the Municipal Court of Cleveland’s clerk and held the position until 1977.

Kucinich As The 53rd Mayor Of Cleveland

In 1977, Dennis Kucinich was elected as mayor of Cleveland and held the position for two years, until 1979; he was the youngest mayor to be elected, at thirty-one, of which he was dubbed as “The Boy Mayor of Cleveland.”

During his term as Cleveland’s mayor, it was one of the most frenzied tenures in Cleveland’s history. For one, Dennis Kucinich refused to sell the city’s publicly owned electric utility, the Cleveland Public Power which enraged the city’s mafia and in turn had him marked on.

There was a plan conceived for a hit man from Maryland to shoot him in the head, to be executed on Columbus Day Parade but the plot went haywire as Kucinich, in an unbelievable stroke of luck, got hospitalized instead and missed the event.

The Cleveland Trust Company, out of the blue, had suddenly issued that all debts must be paid in full which led to a renege as Kucinich still refused to sell the city’s public electric utility. Years later, he was honored for standing up against the banks that helped save the city an estimate of $195 by the Cleveland City Council.

Come 1979, he ran again for city mayor but lost his re-election bid to George Voinovich which led to Kucinich kept out of the public’s eye and to politics. Afterward, he moved to Los Angeles, California where he stayed with his friend, actress Shirley Maclaine, for grappling with finding employment. During the three years that followed, Dennis Kucinich did a variety of jobs; from radio talk-show host to lecturer and consultant.

After these three years, he moved back to Cleveland and ran against Sherrod Brown for the position of Secretary of State of which the latter claimed. Kucinich ran for various seats after pitting with Brown but held no official position until 1994 wherein he claimed a seat in the Ohio State Senate.

During his presidential campaign in 2004, Dennis Kucinich was heavily criticized for his change of stance in abortion, tilting to the side wherein he opted for pro-choice; that women should be free to choose for their bodies.

On his 2008 campaign, he declared that he would pursue the nomination of the Domestic Party for president and told his supporters in Iowa that they should support Barack Obama should his name not be present in the second ballot.

Dennis Kucinich instituted impeachment articles against President George W. Bush on June 10, 2008, on the floor of the House of Representatives which was referred to the House Judiciary Committee the following day, 11th June 2008.

Dennis Kucinich accused that Bush was misleading the Congress into conflict and in addition to that, also charged Bush with fabricating evidence to sway the people’s opinion in regards to the war on Iraq.

Before his impeachment filing on Bush, he prepared to file impeachment proceedings against then-vice president Dick Cheney. On the evening of 24th April 2007, he held a press conference disclosing three article impeachments on Cheney and House Resolution 333.

He accused Cheney of influencing evidence of Iraq’s weapons agenda resulting in the deception of the nation about the connection of Iraq to Al-Qaeda. However, House Speaker Pelosi and Steny Hoyer, the House Majority Leader, was against this on November 6, 2007, that was passed to table the bill and referred to the House Judiciary Committee ending in the complete failure of the attempt.

Dennis Kucinich has been an open supporter of Donald Trump, defending Trump on Fox News and his attempts to improve connections with Russia and even commended Trump’s inaugural speech.

He is a recipient of a 100% lifetime rating from the Brady Campaign to Prevent Gun Violence and was involved in the efforts to imply once again the Fairness Doctrine that provides equal time to liberal and conservative parties.

He is also a supporter of the LGBTQ community and cast a vote for the extension of hate crime laws in the US, as well as same-sex marriage. Aside from these, he is also in favor of the Affordable Care Act with the belief that it is the democratic community’s right.

Dennis Kucinich was awarded the Gandhi Peace Award in 2003, presented to him by the Religious Society of Friends which are related to the peace advocacy organization, Promoting Enduring Peace.