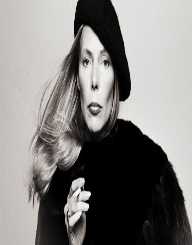 Canadian singer-songwriter Joni Mitchell was born on the 7 November 1943 in Fort MacLeod, Alberta, Canada. She was the only child born to Bill and Myrtle Anderson. In 1945, the family moved to North Battleford, Saskatchewan, Ca and when Mitchell was nine years old, they moved to Saskatoon, Saskatchewan, considered by Mitchell as her hometown. Between the ages of 7 and 9, she had piano lessons. Mitchell was an artistic child who showed a talent for drawing at a young age. At the age of 9, Joni Mitchell was diagnosed with polio, and around the same time, she started smoking cigarettes. She also taught herself to play the ukulele.

Joni Mitchell was a pupil at Queen Elizabeth School, Saskatoon and then enrolled the Alberta College of Art in Calgary, Alberta (1964).

After moving to Toronto in mid-1964, Initially, Mitchell played and sang at parties, then progressed to playing folk music in clubs and festivals. In 1965, she wrote her first song Day After Day. During this time she worked in various department stores to support herself. Mitchell gave birth to a baby girl in February 1965. She then married Chuck Mitchell, a folk-singer. After the wedding, Mitchell gave her daughter up for adoption and later that year, the couple went to live in Detroit. Mitchell made an appearance at the Newport Folk Festival on Rhode Island in 1966 where she debuted what would go to be some of her most well-known songs: Michael From Mountain, Chelsea Morning and The Circle Game.

The marriage to Chuck Mitchell broke up, and in 1967, Mitchell relocated to New York City to follow her career as a singer-songwriter. She played at various festivals and venues and began to make a name for herself. Folk singer Tom Rush took an interest in Mitchell’s career and recorded The Urge For Going which was subsequently filed by George Hamilton IV and turned into a country hit. Eventually, artists such as Judy Collins and Buffy Sainte-Marie began recording Mitchell’s songs as well as Judy Collins have a hit with Both Sides Now.

In 1967, Mitchell met Elliot Roberts, and he became her manager. She met singer-songwriter David Crosby in Florida, and he also took an interest in her career. Mitchell then moved to Southern California. Reprise Records released her first album in March 1968 and Crosby was the producer. She began appearing at the Troubadour to critical acclaim. In 1968 she met Graham Nash of the Hollies. The same year, Judy Collin’s recording of Both Sides Now reached the top ten nationally.

Mitchell’s second album was released in April 1969, entitled Clouds and it had a version of Both Sides Now. After Joni Mitchell (1968), Cloud (1969), she went on to record some albums including Ladies of the Canyon which turned gold and contained her hit Big Yellow Taxi. Mitchell moved away from the folk music influence style of previous albums, and her fourth album Court and Spark (1974) showed a jazz influence and was critically acclaimed. Other records included Blue (1971), The Hissing of the Summer Lawns (1975), Hejira (1976) and Turbulent Indigo (1994). Her latest album was Shine (2007). Mitchell released 17 albums and her style influenced a generation of singer-songwriters.

Mitchell married folksinger Chuck Mitchell in 1965, and they divorced in 1967. She had some high profile relationships over the years including with David Crosby, Graham Nash, James Taylor and Jackson Browne. In 1982 she married musician Larry Klein, and they remained married until 1994 but had no children together.

In 1997 Mitchell was reunited with the daughter, she had given up for adoption in 1965.