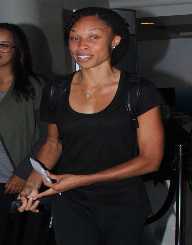 American track and field sprinter Allyson Michelle Felix was born on November 18, 1985, in California. Her father is a minister and a professor of New Testament at the Master’s Seminary. She is a devoted Christian. Her mother is an elementary school teacher. Felix’ older brother Wes was also a sprinter and currently acts as Allyson’s agent.

Felix discovered her talents in a sport in ninth grade, when she tried out for a track. After her first tryout, Felix quickly went to compete at the CIF California State Meet, where she became a five-time winner. Felix attended Los Angeles Baptist High School in California. In high school, she got the nickname chicken legs- despite her six-foot-six tall body and fantastic strength, her legs are very skinny. During high school, she could deadlift 270 pounds. In 2003 Felix was named the High School Athlete of the Year. The same year, Felix ran 200m in 22.11 seconds in a meet in Mexico City- the fastest time for high school girl in history. She graduated in 2003 and signed a professional contract with Adidas. The company paid her an undisclosed sum and also paid her college tuition to the University of Southern California.

Felix began her professional career with major success. In 2004 Summer Olympics, when she was just 18 years old, Felix won the silver medal in 200 meters. The following year, she became the youngest gold medalist in 200m sprint at the World Championships in Helsinki. She defended her title two years later in Osaka.

Felix qualified for 200m race for the 2008 Olympic games but missed the qualification for 100m. Despite her successful season, she finished with a silver medal. She also ran the 4x100m relay with the U.S. women’s team and finished with a gold medal.

The three-time World Champion Felix still felt frustrated about not winning the Olympic gold. She started to focus more on the 400 m races. In 2010, she made history by becoming the first person to win two IAAF Diamond League trophies the same year- in 200m and 400m sprint.

In 2012 Felix began to qualify for the Olympics. The schedule of events required her to choose between attempting to qualify for 100m or 400m runs as secondary to 200m run. Felix chose to run the 100m race. At the Olympics, Felix competed in the 100m, 200m, 4x100m relay and 4x400m relay. She placed fifth at the 100m race but won the gold in all other races. In the 2013 World Championships in Moscow, Felix had a hamstring injury, and she couldn’t compete in the 200m race.

After her injury, Felix had to lay off for nine months. In 2014, she resumed her career by competing in the 400m race at the Shanghai Diamond League. She also took part in Oslo, Stockholm, Paris and Glasgow Diamond league meetings. She won the IAAF Diamond League 200m title. The following year she ran the 2015 USA Outdoor Track and Field Championships in 400m.

In the 2015 World Championships, Felix had to choose either to run the 400m finals or 200m semi-finals. The schedule made it impossible to participate in both events. She decided to focus on 400m run and went to win her first gold medal with a personal best time of 49.26 seconds.

Early in 2016, Felix injured herself during training. She had to pull out of Diamond League, and Prefontaine Classic meets. She went to 2016 Olympic trials in Eugene and attempted to qualify for 2016 Rio Olympic games. She got the place on the team in the 400m run but finished as fourth in the 200m run. At the Olympics, she won silver at the 400m run but won two golds in both 4x100m and 4x40m relays.