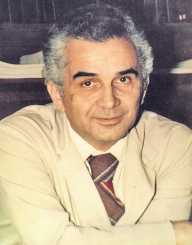 George E. Palade was a Romanian-American cell biologist who won the Nobel Prize in Physiology or Medicine in 1974. Born on November 19, 1912, George E. Palade shared the Prize with Albert Claude and Christian de Duve for his work in electron microscopy and cell fractionation that became the basis for modern molecular cell biology especially with the discovery of ribosomes of the endoplasmic reticulum, which he had described in 1955. George E. Palade served at the Rockefeller Institute for Medical Research from 1958 to 1973.

George E. Palade also served as a professor at the Yale University Medical School and the University of California, San Diego. In 1986, George E. Palade was awarded the US National Medal of Science in Biological Sciences for "pioneering discoveries of a host of fundamental, highly organized structures in living cells."

George E. Palade also worked in the Anatomy laboratory gaining much interest in the field. In 1940, George E. Palade received his M.D from the Carol Davila School of Medicine in Bucharest with a thesis in microscopic anatomy titled “the nephron of the cetacean Delphinus Delphi.” George E. Palade served in the Romanian Army as medical corps during the Second World War.

George E. Palade joined the Carol Davila University after his M.D and worked there until 1946 when he moved to the United States of America for his postdoctoral research under the persuasion of Grigore Popa. In the US, George E. Palade worked for a while in the Biology Laboratory of Robert Chambers at the New York University. It was there that he met Prof. Albert Claude, who he later joined the Rockefeller Institute for Medical Research. George E. Palade became a naturalized citizen of the United States in 1952.

While at the Rockefeller Institute for Medical Research, George E. Palade and his team researched into cell structures like the ribosomes, mitochondria, chloroplast and the Golgi apparatus using the electron microscopy. Using the experimental procedure known as the pulse-chase analysis, they were able to confirm the existing hypothesis that secretory pathway exists and that a Rough ER and the Golgi apparatus function together.

In 1974, George E. Palade shared the Nobel Prize in Physiology or Medicine with Albert Claude and Christian de Duve "for discoveries concerning the functional organization of the cell that was seminal events in the development of modern cell biology." On December 12, 1974, George E. Palade delivered a delivered his Noble lecture titled, "Intracellular Aspects of the Process of Protein Secretion," which was published by the Foundation in 1992.

George E. Palade was married to Marilyn Farquhar, a cell biologist at the University of California, San Diego. George E. Palade had two children from his previous marriage.

Aside from the Nobel Peace Prize in Physiology or Medicine, George E. Palade was also awarded the Louisa Gross Horwitz Prize from the Columbia University in 1970, the US National Medal of Science in Biological Sciences in 1986. He was an elected member of the US National Academy of Science in 1961 and a Foreign Member of the Royal Society in 1984.